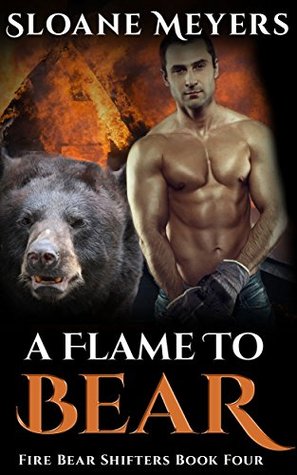 Bailey Webb is a long ways from home when an unexpected tragedy strikes and forces her to rethink life as she knows it. After a handsome firefighter comes to her rescue and convinces her that starting over is actually possible, she starts to make plans for the future that include him. But when he reveals to her that he’s hiding a beast within him, she feels betrayed, and does the only thing she knows to do: runs.

Trevor Hayes can’t believe that the beautiful woman he saved from a local fire actually seems interested in him. After spending time together, and convincing himself that she’s his lifemate, he trusts her with his deepest secret. When she reacts in anger, he gives up on her and decides they must not be fated for each other, after all. So why can’t his heart let go?

Read on for my thoughts on A Flame To Bear.

The off season for smokejumpers is a relief for the forests, but a challenge to keep in shape mentally and physically for the firefighters that jump from planes into the forests to protect them.  Trevor was working at the local volunteer fire company this off season.  A small town with few fires to worry about – except for tonight when a hotel has gone up in flames.  Trevor hears cries for help yet he cannot locate the woman, his fire chief is screaming for him to get out of the building but Trevor cannot leave anyone alive in this infurno.  At the very last possible moment he finds the woman and the man who had died of smoke inhalation.  He could save her at least.

Bailey awakens in the hospital thankful to be alive, sadden at her colleague’s death and clueless how to go on from this point in this remote location with all of her clothing and identification burned up in the hotel fire.  She has a vague memory of the firefighter who had saved her, but at the moment all she is trying to do is cope.  Trevor has an unexplainable need to check up on the fire victim.  There is a sense of knowing her, needing to know that she’s okay.  So he tries a unique way of breaking the ice at their first meeting.

As Trevor and Bailey spend time together, Trevor comes to realize that she is his lifemate.  While he knows she’s attracted to him, will she accept his bear?  Bailey enjoys the company of Trevor, especially since her life has changed so much since the night of the fire.  They might have a future together – until Trevor reveals his bear and Bailey rejects him in anger.

A Flame To Bear is an intense story.  One that hit me on a couple levels.  Trevor has been a favorite of mine from the Bear Claw Clan since I first met him.  He didn’t deserve the way Bailey reacted, so my heart hurt for him most of all.  While it all turned out well in the end, I never warmed up to Bailey again after her rejection scene.  Guess I’m a bit protective over that particular bear.

If you love shifters, if you enjoy paranormal romances and if you simply love a good romance then this is a short story that you’ll want to check out.

(This review was previously posted on my Haunted Bookshelf blog.  I wanted all of my shifter romance reviews in one place, so this review was brought over to Shifter Haven.  Both reviews were written and created by me.)