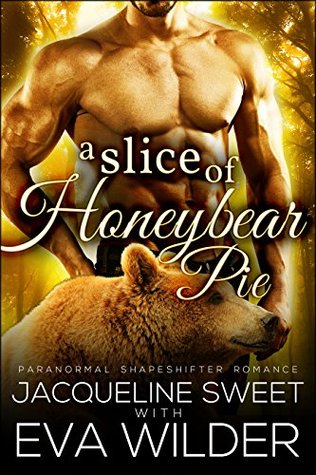 Matt Morrisey is a bear shifter with a sweet tooth, an easy smile, and muscles for miles
When Mina Brooks’ dreams of opening her own bakery go up in literal flames, she has no choice but to run. Bad men are after her and they won’t stop coming until she’s silenced for good. It’s hard to escape though when you roll your car off a mountain road and get tangled up with the local police. Trapped in jail with her enemies closing in, Mina is all but done for.

Matt Morrisey expected the call would be just another drunk who needed a lawyer he couldn’t afford, but when the big shifter laid eyes on his client and her sweet curves, he knew his life was about to change. Mina was his fated mate, he could feel it in his blood. How could he convince the terrified woman that they were destined for each other, that he could protect her, without scaring her off?

As fate pulls the two of them closer, and the dangerous men close in on Mina, Matt has to prove he’s got what it takes to defend the woman he loves from the mysterious forces pursuing her.

Read on for my thoughts on A Slice of Honeybear Pie.

Welcome to Bearfield… where things are not always as they seem in this small, sleepy town.

Mina was on the run.  Away from the former boyfriend who had killed her friend right in front of her.  There was no place to hide or that was safe from Harker and his goons.  So when she flipped her car, and refused to tell the local Sheriff, who amazingly was wearing comfortable slippers on this call, her name, Mina’s day just got the one break she needed.  To say who she was would lead those who wanted her dead straight to her, but she hadn’t counted on the special magic at foot here in Bearfield.

Matt was one grumpy bear when his phone woke him in the wee small hours of the morning.  His work phone so he had to answer it.  As one of two lawyers in town, and the other wasn’t worth mentioning, Matt had to push his sleepy bear’s butt out of bed… at least he could find some breakfast now.  Hey, his bear was always hungry!  The absolutely last thing he expected when he walked into the “jail’s” holding room was to see this beautiful, frightened woman – and his bear roared.  Mate.

Mina wasn’t sure what to think of this town.  A jail housed in what appeared to be a re-imagined family home – and the cell she was in?  A bedroom.  Come on, how were these admittedly goodhearted country folk supposed to protect her from what she knew was coming.  No, she’d been right to not give them her name – in fact, she should just walk out the door and take her chances in the woods.  That thought quickly slipped away as the most sexy, handsome, huge man walked into the room.  And everything shimmered and changed.

A Slice of Honeybear Pie is a quick, cute and sexy introduction to the town of Bearfield and it’s unusual residents.  Matt will convince Mina that her best shot at safety is to make a deal with him – he gets her out of jail and she tells him the truth, the complete truth.  What follows is a sizzling and at times, amusing first hours of a newly fated couple – even if Mina didn’t quite realize what she was feeling for Matt just yet.

The bad guy and his goons does show up and I absolutely loved the play on words and animals that this jerk’s entrance brought.  You’ll see what I mean when you pick this one up to read for yourself.

If you love Shifter Romance, enjoy a good, quick story and have a quirky sense of humor – then you will enjoy A Slice of Honeybear Pie.  Oh, and at the ending of the book you get an awesome recipe for the delicious pie Mina made for Matt in this story.