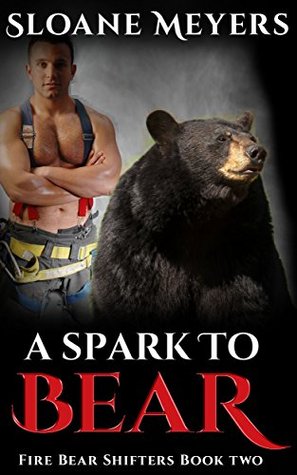 Baker extraordinaire Riley Hughes needs a little time alone, and a solo hike through a nearby wilderness seems like just the thing. But her peaceful trek soon becomes terrifying when she finds herself caught on the wrong side of an enormous wildfire. Luckily for Riley, a strong, handsome firefighter sweeps in at the last moment to save her. She gets a second chance at life—and a sexy new boyfriend. But when her new love interest reveals his shocking secret side, Riley has to decide whether starting over with someone so different from her is worth the risk.

Hunter Wilson is one fearless bear shifter. As a smokejumping firefighter, he regularly jumps out of planes and takes on giant flames. But beneath his tough guy exterior hides a sweet, sensitive bear. A bear who wants nothing more than to take care of Riley, the beautiful woman he’s convinced is his lifemate. The only problem is that stubborn, independent Riley doesn’t want to rely on a man for anything—especially not when that man is hiding a bear inside of him. Hunter has a chance to make Riley’s lifelong dream of running her own bakery come true, but he’ll have to convince her that’s he committed to her for the long haul.

Riley has had a rotten few weeks. She’s been fired from a job she loved, not because she wasn’t good but because the new owner didn’t see the value in spending the money on her. Her boyfriend broke up with her shortly after that one devastating blow. So she’s taken off into the wilderness, into the mountain forests to simply think about what comes next and to accept what’s happened to her structured live.

What she never expected was to be in the direct path of a forest fire or to be running from the flames realizing that this trip may be her last.

Hunter and his crew, his clan had done all they could at this fire sight. The fire was too close and they were being taken out by helicopter. When he smelled it. Or rather smelled her, in danger, his lifemate. He did the only thing he could do – drop from the rope leading up to safety and run into the flames to rescue his mate..

Hunter and Riley’s romance is sweet, tender and a bit frantic. Discovering that your life mate is human is never easy for a shifter. There is always a chance of rejection because of fear and misunderstanding. But while Hunter may be the youngest of his clan, and most likely to be voted a sweetheart who’d never hurt a bee — there is still a lot at stake for he and Riley.

I enjoyed A Spark To Bear very much. It has given us a deeper peek into the makings of this clan and how they are adjusting (or not) to having humans among them.

(This title was originally reviewed on my Haunted Bookshelf blog.  I wanted all of my shifter romance reviews to be in one place so this review was brought over to Shifter Haven.  Both reviews were written and created by me.)