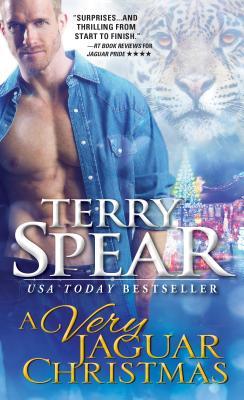 There are all kinds of surprises under the mistletoe!

As a protector of all jaguar-kind, Guardian agent Demetria MacFarlane isn’t surprised to get a call near Christmas—but when she’s sent to protect a cub whose species she didn’t even know existed, her holiday season gets complicated. And it doesn’t help that her partner is a distraction of the hottest kind.

Hotshot JAG agent Everett Anderson can handle dangerous poachers and wildlife traffickers, no problem…but kids? Everett fears he’ll be stuck cub-sitting under the Christmas tree, but working with one sexy Guardian she-cat may be the best present he’s ever gotten

A Very Jaguar Christmas is extra special in more ways than a delightful holiday tale.  In the form of one small child, an arctic wolf shifter, this story brings together the Heart of the Wolf and Heart of the Jaguar series in an intriguing way.  Corey has been dropped off at a jaguar daycare – where he came from, who his parents are and why he’s been separated from them is the main mystery.  Demetria and Everett are assigned the task of discovering answers to those questions, while coming to grips themselves with the reality that there are other shifter species out there besides jaguars.

Demetria and Everett have a bit of history.  She was the girlfriend of his former partner who was killed while on assignment.  Everett has always had feelings for Demetria, but held them in check because she was with one of his friends.  Being thrown together to solve the mystery of Corey gives him the perfect opening to finally act on the attraction.

We will run into characters that we’ve known from earlier stories, actually both series, a new division which requires a new leader to take control over its operation… and some steamy times as our couple discover that love and fate can strike more than once.

My mind is whirling with all the possibilities that this story brings to us, the fans of both Terry Spear’s jaguar and wolf worlds.  Up until now each thought they were the only shifter animal in existence.  For jaguar shifters to discover an aortic wolf shifter pup is… simply amazing – to them and for us.

Because of the ramifications of both series being combined in some ways in A Very Jaguar Christmas, I really don’t want to get into details.  If you’re a fan of Terry Spear and enjoy her Heart of the Jaguar and Heart of the Wolf series, then you should experience this special story firsthand.  I enjoyed the hell outta this one and I believe any shifter romance reader would as well.  Do I recommend it?  Oh, Yes.

This post originally appeared on my Keeper Bookshelf site.  I’m slowly bring over all of my Shifter reviews to Shifter Haven where they’ll be more comfortable among friends.  🙂