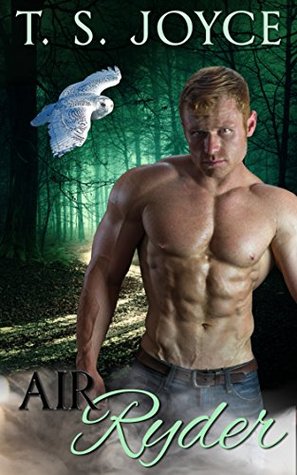 Everything is a joke to an easygoing shifter like Ryder Croy. At least on the outside, because inside, he’s on the hunt for a mate and is beginning to feel like he’s not meant for a bond. He’s on the tail end of a slew of bad decisions, but he’s determined to turn it around and get his life back on track. When Sexy Lexi Porter stumbles into his life, she’s nothing that he expected, and everything he didn’t know he wanted. She’s beautiful, sassy, a professional, and seven levels out of his league, but he’s going for it. Now all he has to do is convince Lexi that he’s the one who can make her happy.

Lexi Porter isn’t looking for love. She’s been burned and is building a life in the small town she grew up in. The last thing she expects is to attract the interest of a rare snowy owl shifter famous for his family ties, online presence, and wit. He attracts attention wherever he goes but he has his sights set on her and she has to admit, the attention is flattering. And when she gets a peek at the real Air Ryder, she’s stunned by what she finds. This smokin’ hot shifter is not what he seems, and now he’s working his way straight into her heart. Too bad for Lexi, Air Ryder’s past has followed him to the serene mountains outside of Bryson City, and if she isn’t careful, she could find herself in deep danger and changed forever.

Read on for my thoughts on Air Ryder.

On the surface, Ryder is a sex on a stick, happy go lucky, naughty mouthed charmer without a care in the world.  Look deeper and you’ll discover a man who is searching for something, hiding from something else and not quite so sure of himself at all.  When Lexi first sees Ryder, he’s at Alana’s newly renovated shop deep in his weekly conversation with his ex – the one who’s holding his dog hostage in order to keep Ryder tied to her nasty self.  It’s kind of hard not to eavesdrop on their conversation when she’s sitting in the booth right next to him.  And what she hears makes her angry for the guy, and wishing he’d just not give the ex the power that he is by begging to see his dog.  Funny, isn’t it, the way the smallest event can change a life forever.

As Lexi and Ryder’s romance begins he’s obviously hesitant, even seeming to talk himself into spending time with her.  At first, that is.  Ryder is not scared really, but he wants a bond with a special woman so badly.  He grew up watching his mom and his step-dad, Mason have such an amazing, loving relationship – the world revolved around the other – and he wanted that, almost desperately.  He’s been burned, badly, so he hesitates but the attraction is too strong to really walk away from.  Lexi’s been hurt recently as well, she might not be looking for that forever guy at the moment, but Ryder is so goofy, funny, potty mouthed in the sexiest way and she’s attracted so why not spend some time with the guy.  What’s she got to lose besides her heart.

As Lexi spends time with Ryder and his crew she’s falling for him in a huge way.  Yet the past doesn’t always stay where it belongs and danger is lurking in the form of revenge and hatred from some truly despicable people.  Ryder is going to have to face his past in order to grab onto his, their future.

I’ve enjoyed all of the stories in the Harper’s Mountains series.  Seeing the kids of Damon’s Mountains series all grown up and stepping out into their own adult lives has been a delicious treat for me.  Yet, Air Ryder has become my favorite of the series (so far), because I remember Ryder’s parent’s story and what he and Mason and Rebecca (Beck) went through to become a family.  So I’m adding a bit of what I knew of Ryder’s past onto his present story.

Without giving way too much, Ryder’s past is in many ways shaping his future.  He is a deep man, yet few look past the joker surface that he presents to the world at large.  Lexi wants to know the deeper man, but he’s not ready to let her in that far just yet.  There are parts of his past that are hurtful, even harmful and he is reluctant to expose her to those truths – not because he doesn’t trust her, but because he hasn’t resolved them for himself either.

While Air Ryder is a sizzling sexy story with lots of lighthearted moments, it’s also a deeper story of how our past shapes us, how the people in our lives direct us without even realizing it – and how love can overcome just abut anything if you will simply let it.

If you love Shifter Romance with a smokin’ hot couple, a glimpse of the special bonds that friendship brings and maybe a touch of real danger to overcome – then you’ll want to pick up Air Ryder.  It’s all that and a lot more.