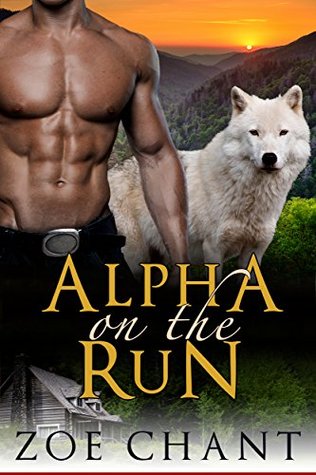 Curvy archaeologist Anna Gutierrez has always been unlucky in love. But this summer all she’s thinking about is researching ancient animals while she stays in her cabin in the woods. But when she rescues a wounded wolf – who turns into a sizzling hot man – she finds that the forest holds more than she ever dreamed of.

Joshua Knight thinks he has no place in the world anymore. A veteran home from the war and a werewolf without a pack, he’s on the run from the criminal alpha who made him a wolf. But when he meets curvy Anna in the woods, he finds the last thing he was looking for – a mate.

Sparks fly between Joshua and Anna, but Joshua’s pack is closing in on him – and now her. Can a lonely woman and a wolf on the run find the strength to fight for their lives and their love?

Hot and Sexy Shifters definitely enjoy lovin’ their mates – a lot – so, an 18+ reader.

Read on for my thoughts on Alpha On The Run.

Joshua is on the run from his vicious, possibly insane Alpha and his pack.  Wounded, Joshua is pretty much resigned to his fate but knowing that death awaits isn’t going to stop him from trying to escape – he simply doesn’t hold out much faith that it’s  possible.  He didn’t expect to find any humans in this remote part of the mountains and even in his dazed and injured state he knows that this woman is special to him.  Their first encounter was when he was in his wolf – and his woman didn’t run from him.  The second was as a man trying desperately to get the human away from the area before his death bringers found him and she got hurt as well.  He couldn’t ask her for help – he wasn’t so far gone as to have found his mate only to lead her into danger – but fate had other plans for Joshua.

Anna was looking for the dead things in the mountains, the very, very long dead things as part of her research and studies.  When a modern day injured wolf hides under her car, she does what she can to help with some food but soon the wolf bounds away.  When the next day she comes across the sexy stranger along the trail, a man who obviously is wounded and wants her gone from the area, Anna is more intrigued than afraid.  When the man finally gives in to his injuries she leads him to her car with the intention of getting him medical help.  She never thought that she would be facing down a wolf pack, a nasty Alpha or had just found her mate for life.  All they had to do now… was survive.

I enjoyed Joshua and Anna’s story.  I just… didn’t connect with them as much as I would have liked.  And I honestly don’t know why, it’s a good story, lots of action and suspense.  I think, and this sounds simply horrible of me, but I think a wounded to the point that Joshua was hero was harder for me to see as a strong wolf type.  And I’m sorry – I know that’s not fair at all – but it is the only thing that I can see in my reaction to this couple that is different enough to explain why I couldn’t connect.  But you know what – just like the real life friends we choose – sometimes our fictional heroes and heroines just aren’t going to be a perfect fit.

But – that shouldn’t take away from your enjoyment of Alpha On The Run.  Because everyone is going to react differently to each story.  It’s a good story, sexy wolf, strong mate and lots of danger.  I’m betting that you’d enjoy it.