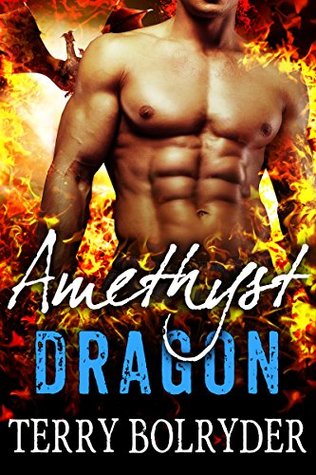 With his dark, ominous powers, Dominic, the Amethyst dragon, has learned to keep his world secret.  Bad things happen when he tries to let people in. Now that he’s awakened, he’s determined to help save the world and disappear back into the shadows. Until he rescues Lana, a feisty, damaged human who draws Dom in and tempts him to risk getting close to someone for the first time in so long. Too bad his dream woman has a no-shifter rule.

Lana gets why other women fall head over heels for shifters. They’re sex on wheels, and Dom, her bodyguard, is no different. A tortured bad boy with dark hair and incredible blue eyes, he’d be her type if only he wasn’t a dragon. But after being kidnapped and harassed by an evil alpha wolf, Lana is sure she wants nothing to do with shifters and their overbearing, possessive natures. So why can’t she stay away from Dom, with his sexy kisses and his mysterious eyes?

And Dom and Lana grow to understand each other better, from unexpected kisses to steamy encounters by the lake, danger is steadily closing in. Now the only way for Dom to save Lana may be for him to embrace his dark powers, and see if Lana can accept not only a shifter, but one who is dark as the night.

On this one I think I need to be blunt upfront because it’s going to come out somewhere in this review.  I absolutely loved Amethyst Dragon – I adored Dom, the story was engaging, the danger felt real, it was a true treat to see all the dragons and their mates together in this story.  The only dark spot in this story… was Lana.  I understood her reluctance and desire to make the choice about committing to a mate in Dom.  After the near forced mating that the wolf shifter Galen tried on Lana during her captivity it was perfectly understandable that she’d not want to give up what she considered control over her future.  I even would have understood her decision if she had stayed true to that through throughout most of the story.  But she didn’t, she wavered, she put a different word, a safer to her mind word on what she was experiencing with Dom.  Even after he had showed her his gentleness, his willingness to allow her all the control she’d ever need from him, she still stubbornly held on to her need to make the choice to mate with him.  By the halfway point of the story I was simply done with Lana.  My alliance was totally Dom’s from then onward.  I think the stupidest moment was when she’d been warned by her friend, the other mates and Dom about one person, she walked right into Dom’s nightmare.  I just… no, no more.

It may sound odd to state that I loved a story but was completely annoyed by the heroine.  Yet, it is the truth.  Amethyst Dragon, takes the series further, close to finding answers that I’ve been waiting for.  And finally, next we will have Aegis, the Emerald Dragon’s story which I fear is going to be a bit heartbreaking but satisfying.  It’s been an amazing journey through this series, and I will be sad to see it end with the next book.  As for Dom and Lana?  Well, Lana’s turn around at the end wasn’t enough for me – but it was perfect for Dom.  So as a reader I have to be glad that my Hero got his happy ever after.