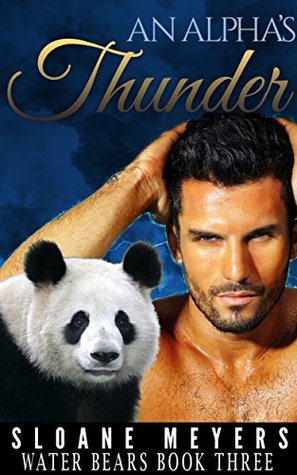 Artist Caroline Hall lives a happily secluded life. She hates the spotlight, and only ventures out into public when an art show requires her to make an appearance. She shuns love, worrying that her status as a well-known artist would turn any relationship she decided to pursue into a front page headline for the local paper. So when a gorgeous man who looks just like her dream boyfriend walks into one of her art shows, she manages to push away any thoughts of dating him. But despite her resolve to remain alone, he keeps popping back into her life unexpectedly. And when his startling secret offers her the possibility of a new life, she’s left wondering if it’s time to take a chance on love.

Panda shifter Lance Bowman has a lot on his mind. With a demanding job as part of a Coast Guard rescue team, and an ever-present threat from an enemy who wants to kill off all bear shifters, he doesn’t have much time to worry about romance. But the beautiful Caroline Hall keeps crossing his path, and his bear keeps insisting that he’s meant to be with her. He decides to make time for love, but Caroline isn’t impressed by his advances. Just when he’s ready to give up on her, though, a surprising turn of events gives him one last shot at winning her heart. But first, he’ll have to convince her that he’s worth shaking up the comfortable life she’s been living.

Will Caroline be brave enough to follow Lance into a new life, leaving behind everything familiar to her? And can Lance convince Caroline that she’s destined to be with him?

Even the ocean waves are hot around these Coast Guard panda shifters – definitely 18+ readers.

Been waiting for Lance’s story?  Then read on for my thoughts on An Alpha’s Thunder.

I am so torn on An Alpha’s Thunder.  I’ve loved the Water Bears series, I absolutely adore and pant after every single guy here.  And Lance is one hot, sexy shifter who deserves his happiness.  But there is one word that describes why I cannot get as excited about this one.  Caroline.

In my opinion she doesn’t deserve Lance.  Harsh, maybe but can’t help how I’m reacting to this particular panda romance.  I “get” that Caroline’s parents, her wealthy parents, disowned her because she didn’t follow their protocol of the perfect daughter… and that hurts, there is no denying that.  She’s worked hard, taken her unique relationship with storms, thunder and their effect on the oceans, lakes and rivers and transformed that wild, emotion of the water onto the canvas.  Her talent is untouchable.

Lance lost everything – everyone he loved to the cruelty of the scientists who designed a poison to kill off the panda shifters.  His entire clan wiped off of the face of the planet.  Fate left him as one of four surviving Alpha panda shifters.  Four men who hide in plain sight, while trying to rebuild a different life.

And after he’s practically stalked her, done everything to appease her and her fears.  She still walks away.  Caroline redeemed herself a bit to me when she called him about the men in the bar and their conversation about his crew.  A bit.  But even then, after she’s seen them all shift and they have shown her their every secret… even when Lance lays out his heart and soul to her – she’s ready to run.  Standing at the door, silently, mentally begging him to be the brave one and stop her.  Really??  Why can’t she be brave?  If she really feels as she thinks she feels – why the hell can’t she be brave.

Aargh!  I understand that Caroline is scared, of many things.  That she has worked hard for her privacy and her position in the art world.  I get that she has underlying emotional troubles of abandonment by her parents.  I do get all of that.  I don’t hate Caroline – I just don’t like her very much.

As the final story approaches, as we will finally see the Water Bears and the Northern Lights Clan work toward ending the scientist’s evil plan.  I cannot help but wonder – there in the wilds of Alaska when everything is finally on the line.  Then will Caroline finally be brave and fight alongside of her mate.  I hope so, I really do.

(I really do love this series, I just want the girl to be brave, too)