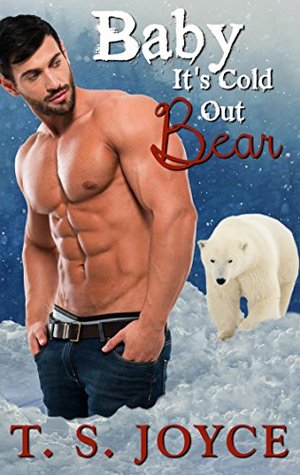 Emry Mason doesn’t expect to be pulled out of an icy ditch by a registered bear shifter, and she certainly doesn’t expect her rescuer to be as alluring as Graylan Young. He’s rented a room at the house she lives in, and with every growly encounter, he’s laying claim to her heart. But Graylan isn’t much for the festive season, and to win Emry over, she has one rule. Must love the holidays.

Graylan is only in town for a little while before his inner animal will demand he move on. But when he meets Emry, his life is turned upside down. Not only is she beguiling and different from every woman he’s ever met, but she has him wishing he could ignore his nomadic instincts. He might not be into the holidays, but suddenly all he wants for Christmas is to settle down with the woman he’s falling for.

Read on for my thoughts on Baby It’s Cold Out Bear.

And although this story takes place in the small town where T. S. Joyce’s series Fire Bears, made their impact on the world, the Breck Crew does not appear, they are mentioned often but we never get to see them again – which I admit, I was hoping for a little conversation but this is very short Christmas novella so I wasn’t completely surprised.

Baby It’s Cold Out Bear is a lighthearted Christmas tale of two people who probably wouldn’t work together, but love gets past obstacles that we humans (and Shifters) put up as blocks.  In this Shifter world it’s only been about a year since Shifters made their presence known to the human world.  While not as volatile as when they first announced themselves, the groundwork between Shifters and humans is still at times… shaky.  Often with preconceived ideas about each side’s actions.

Graylan is a loner.  He is constantly traveling the country, staying in one place only a short time until his bear has him on the move once again.  He’s been hurt by a human, the woman he thought would hold him and his bear in one place forever, yet when she is horrified to discover just what her boyfriend truly is, Graylan sees her for what she truly is… a vindictive snob.  So romantic entanglements is not on Graylan’s to-do list, ever again.  When he is asked by his new landlady to go to the rescue of the other tenant in her home, Graylan never thought that he’d be face to face with his mate – or what to do about that.

Emry has been hurt in love recently and has stifled any romantic notions.  Right now she’s enjoying the Christmas season and looking forward to decorating her landlady’s beautiful home for Christmas.  That is if she can get home through this blizzard, and out of the ditch that a spot of black ice has tossed her into.  When Graylan shows up to rescue her, Emry didn’t expect the heat between them or to discover that her knight in shiny fur hated the holidays.

What began as a rescue could turn into a romance for a lifetime – if these two can get past their fences and let each other in to their lives.

I enjoyed Baby It’s Cold Out Bear so much.  It’s perfect for those times during the holiday when you don’t have a lot of time to spare for reading, but still gives you a charming, Christmas romance in a short amount of time.  You love the holidays and Shifters?  Then this one needs to go onto your Christmas reading list.  Enjoy.