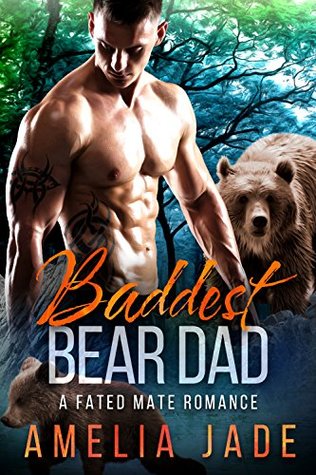 The A Fated Mate Romance set of stories has taken us on quite an adventure over these six books.  We’ve met some incredible men and women, human and shifters along the way.  And while it appears that this is the last story, there was mention of one still single shifter at the embassy … I never say done until the next series begins.  *grin*  Yet if Baddest Bear Dad does bring this part of the Cadia saga to a close it’s been one helluva ride.

Braden and Elle’s romance is full of fast paced action, danger, stubbornness and a bit of clueless-ness at times as well.  They were a delightful couple, even when being their most stubborn.  We meet up with  just about all of the characters we’ve come to know in the A Fated Mate Romance stories – and a few from previous stories.  The story wraps up very nicely… but there are still openings that I can see that may take us in a different direction.  Only time will tell on that.  I don’t want to get into detail on this story for it’s one you should experience for yourself.  But I will say it is well worth your time and it is a really, really good story.

I’ve had fun, I’ve enjoyed every single story… and I sincerely hope our time with the shifters of Cadia is not done just yet.

I’d recommend this story and all of the connecting series to any Paranormal Romance or Shifter Romance reader who enjoys likable characters, a tight plot and surprises around every corner.  It’s rather addicting.