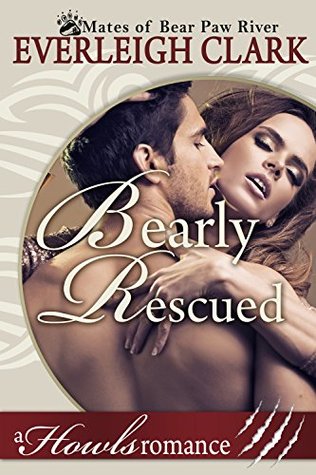 Caleb Alexander – Bear shifter. Running from a haunted past…Undercover guard. His job is simple. Get the information so they can take down the assholes testing on shifters. There’s only one problem. His mate is one of the prisoners, and his bear is about to lose control…again.

Howls Romance titles have their own special page – check it out.

Bearly Rescued, the third story in the Mates of Bear Paw River series is full of fast action, sexy moments, danger, vile villains and a geek’s playground of pop culture jokes, sayings and quotes.  What’s not to love about all of that?  Toss in a guilt ridden almost alpha and a will not be caged runaway royal and you’ve just handed me my kind of story.

I loved Izzy and Caleb together.  They’re just enough damaged by their pasts to make for an interesting mix.  Izzy is in the wrong place at the wrong time and that sets up her misadventures and finding her mate, well, if she was in the market for a mate but she wasn’t… or so she told herself.  Caleb is willing to do anything to make up for what he believed were his past mistakes – even infiltrate the compound of one nasty bossman and his totally crazed scientists.  What he didn’t expect to find was his mate – now he has to rescue them both before things get totally out of hand – and they will.

I always enjoy catching up with the previous couples and secondary characters in any series.  The threads woven through this series hold firm and perhaps even branch out a bit more, and I’m loving it.

If you love fast paced action, a mated couple who are trying too hard to deny that pull, vile and nasty villains and a complete sense of pack and community – then you’ll love Bearly Rescued.  You really need to be wrapped up in this story for yourself, but what a great story it is.  I’d highly recommend Bearly Rescued and this entire series to any Paranormal Romance or Shifter Romance reader.  I’m already on pins and needles for Sam’s story, it can’t release soon enough for me.