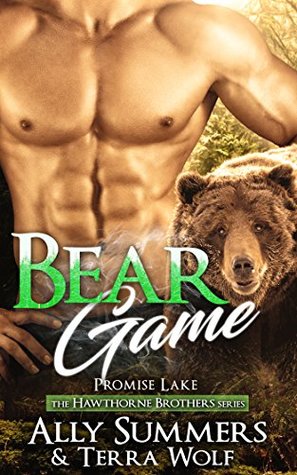 Bear Game is an intriguing romance with a slightly different slant on Shifter lore.  When he took over his father’s place as alpha of their clan, and CEO of their company Grayson Hawthorne also seemed to take on his father’s persona as well.  He’s acting stuffy, controlling and old beyond his years as the weight of the leadership of clan and company bears down on him in unexpected ways.  His brothers have a different outlook on life – and they are about to shake up Grayson’s world… in more ways than redecorating his office.

Sienna needs this newest job to secure her partnership.  She’s good, really good at what she does, and if she can grab this client then her professional dreams are about to come true.  Too bad the man she’ll be working with is as stuffy and set in the past as his office decor seems to be.  She hadn’t expected this spark between them, or the evil looks from Grayson’s assistant.  No, this job was about to get extremely interesting… and dangerous.

I enjoyed my time in this world.  Bear Game has some unique story lines, and it will be interesting to see how they play out.  Grayson is definitely all alpha in his attitude and his determination to win his mate.  Sienna is human, and this world of shifters is totally unknown to her.  She has much to learn quickly, and danger to face immediately.  A very unique slant on Shifter lore makes this story compelling and extremely interesting.

I would recommend this story to any Paranormal Romance or Shifter Romance reader.  An unique plot line, interesting couple, and more brothers to add into the mix down the line makes for a truly unique read that I believe you’d enjoy.