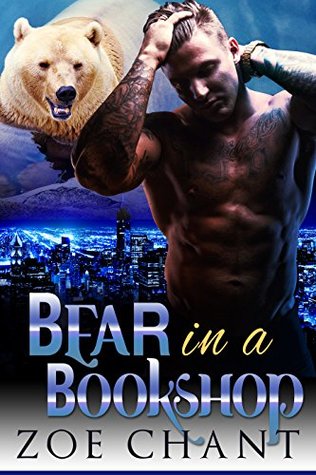 He’s all wrong for her.
So why do his arms feel so right?

When shy bookworm Melody daydreamed about her perfect man, “must love books” topped the list. She never dreamed of someone like Gunnar blowing into her neatly alphabetized and indexed world to turn it upside down. Finding out that her one true mate is an ex-con with a grade school education must be fate’s idea of a cruel joke. Never mind that his kisses make her swoon and his touch turns her traitorous knees to jelly …

Sent to prison for a crime he didn’t commit, Gunnar is six and a half feet of gruff, dyslexic, tattooed bear shifter ex-con hiding a gentle heart. He knows he could be the man Melody deserves, if only she’ll let him unleash the passionate woman hidden underneath her sexy librarian cardigans.

But with danger from both their pasts closing in fast, Gunnar is running out of time to prove to Melody that a good girl and a guy from the wrong side of the tracks just might be able to write their own happy ending.

Titles in the Bodyguard Shifters series include:  Bearista – Pet Rescue Panther – Bear in a Bookshop –

Bear in a Bookshop brings the Bodyguard Shifters series along a bit further in the underlying thread that holds all these stories together… a very bad guy with murderous intent.  Gunnar is the younger brother of the bad guy called Ghost.  Right now Gunnar is in prison taking the fall for something his brother did but he could not prove.  His world is about to change when he has the chance to not only get out of prison but help capture his brother.  No one in this group trusts  him, not truly at the beginning – it’s too easy to see him as just slightly less dangerous than his brother.  The other thing Gunnar didn’t expect when he woke up behind bars this morning was that he’d come face to face with his mate… a mate who doesn’t seem to want him around, at all.  I will freely admit that I fell for Gunnar.  He’s a gentle giant who has spent his life being picked on, bullied and used by his brother and others mainly because of his dyslexia.  It’s obvious from the very beginning that Gunnar longs to escape into the worlds that books can provide but he cannot because the words make no sense to him as they’re all jumbled up.   This polar bear shifter who has been bullied and bewildered his entire life just broke and captured my heart.  At the beginning I really wanted a better mate for him than Melody.

I wish I could have warmed up to Melody a bit quicker.  Oh, she redeemed herself later in the story, but at first she kind of looks down on this man who is a criminal, doesn’t have any favorite books and is not at all what she’d imagined her one day mate would be.  Melody lives for books, her hoard is made up of books so to her way of thinking she’d be paired with another intellectual who also loved books as much as he would love her.  Surprise.  Once she understands the difficulty that Gunnar has with reading she began to see him differently, but not before she’d made some foolish decisions.

Throughout Bear in a Bookshop Gunnar is seen not only as a hero but as a victim as well.  He is probably one of the less alpha shifters I’ve ever read about but that doesn’t mean he’s a pushover.  He’s unique and I happen to have loved him for that.

The action in this story is fast faced, we’ll meet up with the other couples from the earlier books in the series along with Ben and Melody’s father.  Steamy moments, danger, a unique pairing and a very tenderhearted polar bear shifter… yeah, I loved this one.  I’d recommend this story and the entire series to any Paranormal Romance or Shifter Romance reader.