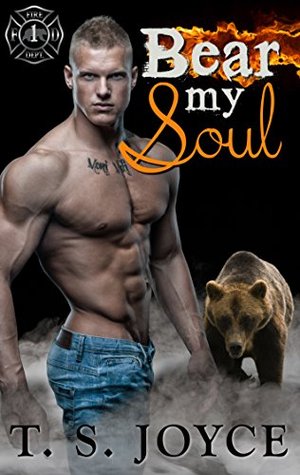 Rory Dodson is done running. After one night of bliss with a man she never thought she’d see again, she’s in trouble with a young son who is housing one ferocious little bear cub inside of him. Desperate to keep her baby’s secret safe, she has nowhere to turn but to the man she was determined to keep in her past. What she doesn’t expect is the instantaneous, heart-pounding connection she remembers from before. But all of the sex appeal in the world can’t hide the fact that Cody Keller is keeping dark secrets of his own.

Alpha bear shifter, Cody, is a firefighter by day but something more sinister by night. Towing a fine line between leading a normal life and keeping the government off his crew’s back, he has been running missions that few sane men would take, and even fewer would survive. But when the woman he has searched six years for blows back into town, toting a kid who bears his mark, his life is about to get a whole lot more complicated.

It’s not enough to protect the Breck Crew from the growing threats around him anymore. Cody will have to push back and stand up for his kind if he wants a shot at keeping his fragile new family safe from what he’s become.

Sexy Shifters ahead, ones who aren’t shy about loving their mates – adult, 18+ readers tale.

(If you are following the recommended reading order from T. S. Joyce’s website, then Bear My Soul comes between Sawman Bear #4 and Axman Bear #5 in the Saw Bears series)

Sometimes one decision, one choice can change your life forever.  Rory’s one night with Cody did exactly that.  Oh, there’d been a instant spark between them, and she didn’t really regret the one night they had.  It might have been more, it could have been the start of a lifetime except for one word whispered by Cody at the very wrong time.  So she fled, only to discover that she took more away from that night than bittersweet memories.

Cody had searched for Rory after she left, but with no luck in finding her.  He was floored to discover her standing in the pizza shop, and even more surprised when she started asking about supernatural abilities.  But his surprise turned to delighted shock when he encountered his son, Aaron for the first time.  He soon discovered that Aaron was having difficult shifts, mainly because he had no other shifter to teach him how to hold on to his human during the shift.  He had, without meaning to, hurt Rory during the shifts.  And now Rory is back in his life, needing his help with their son.

While Cody was happily stunned at his new fatherhood, his family was beyond ecstatic.  Little Aaron had uncles, an aunt, a loving grandmother and twin cousins to help him understand exactly what it meant to be a shifter and how to control his bear.  And as Rory and Cody worked their way back to each other, there was a cloud hovering over this new family’s happiness.  Cody is not only a fireman, holding down the traditions of his family – he is also a black ops operative working (under blackmail and protest) for IESA, The International Exchange of Supernatural Affairs.  Cody and his brothers all work for this agency – their job, taking down terrorists.  Only… there may be more to that claim than any of them knew.

Life is changing for Cody, Rory and Aaron quickly, as it is for all shifters.

Bear My Soul will introduce us to the shady agency IESA and the impact that agency will have on the continuation of these connected series under the arch of Damon’s Mountains.  There is change in the wind, and not the good kind.

While I love Shifter Romance, I truly enjoy when an author gives me an ongoing, in-depth story line that covers an entire situation right up to it’s resolution.  That is exactly what T. S. Joyce has given us in the group of series Saw Bears – Fire Bears – Gray Back Bears – Boarlander Bears.  As I’ve mentioned in another post, I binge read this amazing group of series from first to last without stopping to review along the way.  I simply fell into their world and was completely captivated by the characters and the dangers they faced.  Each series could be read independently, but it flows together so much better if you follow the reading recommendations of the author… it just all makes more sense that way.