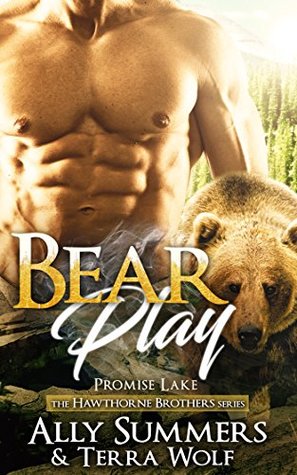 At the beginning of Bear Play Oliver Hawthorne comes off as an entitled jerk.  It’s true – he sees land, he wants the land, and with a snap of his fingers and his anger he intends to get the property he wants – after all, everyone has their price.  Yeah, not always.  Savannah certainly doesn’t have that price available to Oliver since not only is this property that she inherited from her uncle all she wants and needs, the Hawthorne’s have taken away a dream of hers in the past.  So there is no way that she’s selling out to Oliver Hawthorne.  and the battle of wills is now fully engaged between Oliver and Savannah – and the need to protect and claim his mate as well.

I had fun with Bear Play.  Savannah and Oliver are well matched in their stubbornness, their attraction for each other and in their need to protect each other.  There is unexpected danger afoot, a glimpse at a couple from the first Hawthorne story as they are today, plenty of sexy times and an entertaining story.  I would recommend this story for any Paranormal Romance or Shifter Romance reader.  While it’s certainly not necessary to this story line, you might want to pick up Bear Game as well since these two stories do somewhat tie in to each other.  Plus it’s a good, fun and sexy story as well.