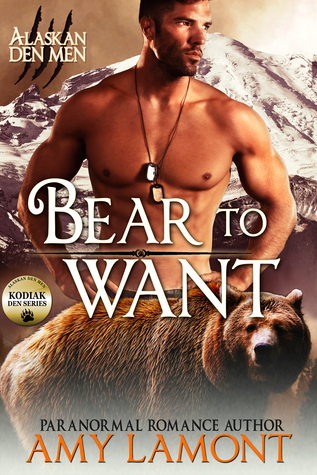 Curvy waitress Alyssa Parker swore off werebears before she was old enough to date. But in a town like Kodiak where bear shifters far outnumber humans, her pledge has put a major crimp in her love life. Add to that the fact she’s always felt like an outsider in the tightknit community, and it’s no wonder Alyssa wants to move far away from the small Alaskan town and forget shifters exist.

But the dream of escaping seems impossible when her mother leaves town, taking Alyssa’s life savings with her. Adding insult to injury, Kaden Black, the one werebear who could tempt her to break her vow, just moved back to town. And for reasons she can’t fathom, the wildly sexy ex-Special Forces shifter is determined to claim her as his mate.

Can Kaden convince Alyssa that he’s just the shifter to give her the love and family she’s always longed for?

Read on for my thoughts on Bear To Want.

Kaden was done with the military, but he’d certainly take the training from his Special Forces days and along with a few buddies would open up a security consultation company here in their hometown.  A bear had to provide for his mate, so why not do what he did best.  Now came the hard part finding Alyssa and convincing her that they were meant to be together.  She’d been too young to claim seven years ago, so he went off to serve and gave her time to grow up, finish college and hopefully be ready for him when he returned.  He simply had to find her and that’s where his special training would come in handy.  The thing is, life doesn’t always work out the way we planned.

Alyssa figured she had six months until she could finally leave Kodiak behind.  She’d been saving every penny possible from her two jobs and freedom was so close.  This town where the bear shifter population outnumbered the humans would be in her rear view mirror soon enough.  Not that she had anything against bear shifters, in fact there was one man in particular who she’d love to hold a lot of herself against – but he’d never noticed her and anyway Kaden was off in the military somewhere, best left to teenage dreams.

Then life got interesting as Alyssa walked into work – and Kaden turned around in his chair to watch her walk to the back of the bar.  Finally there she was, his mate, all grown up.

Bear To Want is a fun, sexy story with one stubborn woman and one adorably growly bear.  Kaden has a serious case of foot in mouth disease.  The man has this natural talent at saying the wrong thing at the totally wrong time – watching him try to extradite himself from his own words is often amusing if not down right funny.

Kaden had no idea that Alyssa’s dreams had been ripped away from her, or that she had been on her own for years.  While he had thought her safe and happy living out her dreams, in reality she had been a high school student abandoned by her thief of a mother, struggling to keep a roof over her head, save for school and always aware that the town painted her with the same brush they had her mother.  Yeah, mommy dearest who had a taste for bear shifter and she didn’t care for how long it lasted – she’d been searching for something, but no smart bear shifter would give her more than a short visit.  Although it wasn’t true in general, Alyssa felt the townsfolk looked down on her as being exactly like her mom.  Oh she wasn’t, and truth is only a couple jealous biddies thought that way – but it’s hard to convince yourself that your biggest fears just don’t exist.

So now Kaden has a different reality.  His grand plans to swoop his mate up and go live happily ever after in his house – well they needed revised a bit.  He had to do some courting and convincing.  Yeah he had his work cut out for him.

Looking for a fun romance with a very stubborn human and a bumbling, foot permanently inserted in his mouth bear shifter?  Then pick up Bear To Want, you’ll giggle and swoon – an impressive combination.