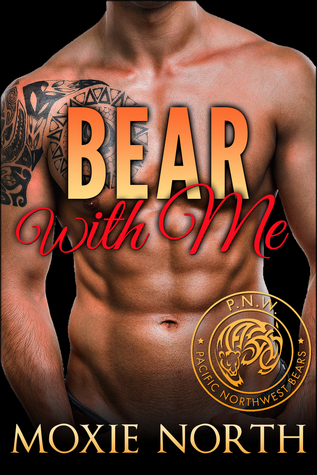 Conner Rochon thought living in the wilds of the Pacific Northwest and running a logging company with his brothers was tough work. Add to that, he wasn’t too keen on sharing his body with a grizzly bear. Shifters normally had no problem with their animal side. Conner was not one of them.

Mackenzie never gave a second thought to being a shifter. She loved it and finding out that she and her cat were mated to a reluctant bear was a blow she wasn’t expecting.

Conner is tired of not being able to make his own choices in life. Is he willing to lose the love of his life to keep control of who he is? Does Mackenzie have the will to fight for them both?

Read on for my thoughts on Bear With Me.

Bear With Me is  Conner and Mackenzie’s story, the third in the Pacific Northwest Werebearsseries.  Conner’s story doesn’t have the “thunderbolt” of desire and rightness that Cage had.  It doesn’t have the happy-go-lucky charm of Wyatt’s romance.  In his brothers tales of love Conner was the typical youngest brother, the brunt of goodnatured brotherly jokes, the one who bolstered up his brothers when things went bad and the one who most obviously didn’t “get it” when Cage and Wyatt found their mates.

Conner has been living a lie most of his life.  He resents his bear, doesn’t like the loss of control over his own life that having a fate chosen mate demands and will not give in to the shifter lifestyle requirement of claiming his mate.  No, it is not his choice and he wants nothing to do with the woman the fates have stated is his one and only love.

Kenzie never shied away from her cat.  She and her cat were one and they were the happiest on the run, wild and free.  She knew that her mate was “out there” somewhere and one day they would find each other.  Until then she put up with her mother’s matchmaking in hopes of forcing a mate bond and lived her life on her family’s vineyard.  At the request of her brother, Dax, she made the trip to the logging company of a clan of shifter bears since the troubles they had had at their vineyards seems to have moved to that location.  She never expected to find her mate on this trip.  Never expected to discover that not a cat but a bear was the man, shifter she was fated to love forever.  And never, ever expected the pain and loss she would endure when her mate rejected her.  Oh, she was good enough for mindblowing sex – but nothing more.  No love, no connection, no children, no life of devotion between her and this bear.  How could fate be so cruel as to show her the pathway to paradise and then block her at every turn from entering.

Kenzie and Conner’s story is one of sadness, of fighting against what could be the best thing life has to offer.  While the attacks on the logging company intensify, the danger to all of the family members increases.  There comes a moment when Conner’s life or maybe his understanding of his life will change – but will it change him deep enough to understand the damage he’s inflicting on his mate, the one he is supposed to defend, protect and love for their lifetime.

I enjoyed Conner and Kenzie’s story very much.  Probably because it shows a part of the shifter life that we very rarely read about.  What happens when one soul sharing an existence denies its other half?  What happens to the animal spirit when the human wants nothing to do with it?  How does a woman survive knowing that the man she loves, the one she would climb over any obstacle for feels no connection to her emotionally?  How can love survive unfeed?

Bear With Me is a story that anyone who enjoys paranormal romance should read.  The passion is there, but the love, the acceptance is slow to show its face.  Read about another side to the shifter mystery and celebrate the ones who never had to face this type of challenge.  A well thought out and executed storyline.

(This title was originally reviewed on  my haunted bookshelf blog.  I wanted all of my shifter romance reviews in one spot, so I brought this title over here to Shifter Haven.  Both reviews were written and created by me.)