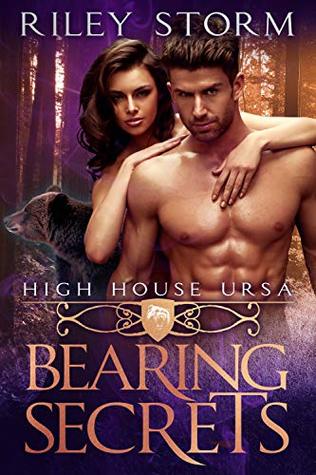 The last thing Natalia Kristoff expected was that her friend’s wild dream to find her a fake husband for a Green Card would have any sort of success. Yet here she is, sitting in a private booth, listening to the sexiest man she’s ever seen lay out the details of just what he needs from her. In return, he’s going to sign the papers that stand between her and her dream job. She can’t believe what she’s hearing. Stand at his side, pretend she’s madly in love with him, all to satisfy some crazy family tradition? That’s a deal she can live with.

Kirell Ursa has a problem. A big one. His bear shifter family is in shambles, struck from within by traitors. With no one in charge of security, the head of his House has nominated him for the job. The only problem? Tradition dictates that anyone in power must have a mate. If he’s going to pull off this scheme, he must find a mate in the next 72 hours. Someone. Anyone. All they have to do is pretend to love him for a few days.

Things get off to a rocky start between the two when their first date is interrupted by Kirell’s enemies. As he slowly exposes Natalia to the truth, she’s forced to come to grips with the existence of another world, one she never thought existed. Shifters of all sorts collide as Kirell’s enemies work to expose his fraud, but the harder they try, the more Natalia finds she wants to be by his side. Can a relationship built on a handshake business agreement turn into something real, even in the face of a threat to Natalia’s very life?

“Bearing Secrets” is Riley Storm’s debut novel and the beginning of her High House Ursa series.  It does not have the feel of a debut instead I was transported into a world immediately that was full of tension, treason, action and believable situations that I would expect from a seasoned storyteller.  So I am definitely looking forward to following this series to see where this adventure takes us.  Much of what you need to make the decision to pick up this book is in the cover description.  There is world building, I expect that, yet it flows easily through the dialogue and narrative in a way that does not feel like an information dump.

We step into the middle of a, for now, foiled coup as the story opens and immediately the threads are beginning to be woven to expose a much deeper problem, and more sinister enemies to be dealt with… eventually.  I get the feeling of a chess match being set up by masters as the pieces (people) are set in place and each side begins their moves toward ultimate power.  Kirell is the Queen’s opening move, and his placement makes such sense, especially as we learn more of the lore and traditions of this world.

Natalia and Kirell both came into this partnership expecting something from the other, and while they got what they wanted… for the most part, what they didn’t expect was for those feelings to turn into something neither expected.  For the pretend to become far too true, or for the troubles and sacrifices they each would be willing to make for the other.  Watching Natalia’s and Kirell’s relationship develop was fascinating.  I liked them both, they each have some surprises for each other along the way.  I believed in how their real feelings came about even when they gave me some serious heart attacks over their behavior.  The secondary characters are unique, interesting… and many are still a puzzle as to whether we should completely trust them.  That adds another layer of tension to this story, and I suspect to the entire series.  “Bearing Secrets” got me hooked on continuing this series, it answered as many questions as it presented.  And now I need to know what happens next.  I would not hesitate to recommend this story to any Paranormal Romance or Shifter Romance reader who enjoys puzzles, intrigue and interesting characters to figure out.