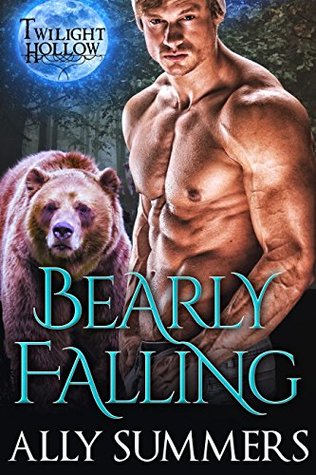 Bearly Falling is a short, fast paced introduction to this series that packs quite the emotional and sensuous punch.  Boone is the alpha of his bear shifter clan and although finding his fated mate one day is important to him, in the meantime he has an apple orchard business to watch over, a clan to tend to and now… someone has dropped off a gypsy cub on his land.  A toddler who by definition could be shunned and banned from her clan.  This little one isn’t part of his clan but Boone certainly has no intention of leaving her out here to die.  What he certainly didn’t expect on this day right before the Fall Festival was a baby and finding his mate.  Life just got complicated.

Gabi is human and while she’s aware of shifters, she hasn’t had any contact with any… that she knows of.  As the new event co-coordinator for the Fall Festival she’s in town for the final check that all is ready and in place for the event.   She’s run this event from her office in the city, and she’s about to get an interesting introduction to small town life.  Probably the last thing Gabi expected as she tracked down Boone McScott was that she’d meet face to face with a bear shifter, a lost baby and the handsomest man she’s ever encountered claiming to be her mate.  What the heck?

Although there are bonus stories in this Kindle edition of Bearly Falling, this story is rather short.  A lot happens, very quickly, but it’s enough to give a good feeling toward any future stories to come out of Twilight Hollow.  Boone and Gabi make a strong couple for they are both stubborn, insanely attracted and committed to each other.  They work smoothly to care for a lost little cub and find a solution for her and her mother.  The sexy times are heat magnified, intense and yet with a sweetness to them that always gets me believing in fate being right about  couple.  I liked Boone and Gabi, and I’m definitely hoping to run into them again.  I know there is at least one more story planned, but I’m hoping for even more – time will tell.

I enjoyed myself in this world, and I’ll definitely be looking for the next story.  I’d recommend this one for any Shifter Romance or Paranormal Romance reader.