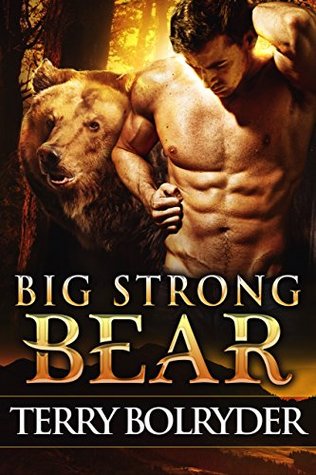 Big Strong Bear may just break your heart while giving you a powerful story to enjoy.  Before Hades went away to the military and his special ops unit he and Cassie were young lovers, mates and had the whole world ahead of them.  Then life happened.  While on duty Hades was badly injured and the damage was beyond his shifter healing to complete.  He’s left with the scars on his body and his soul.  When he returned home he avoided his love, his mate feeling no longer perfect enough for her.  (Men…sigh)  Eventually Cassie stopped coming to his door but she didn’t stop watching over him.  Which turned out badly for her when she saw something she misinterpreted and that set up resentment and pain.  Two misunderstandings lead to a whole lot of heartache for this couple.  And it gets worse when Cassie is in enough trouble to show up on her mate’s doorstep asking for help.

I’ll be honest, my heart ached for this couple while I wanted to sit them down for a stern talking to at the very same time.  Watching their  love be rebuilt, rekindled was an enjoyable experience.  And getting to see all the other people from this series one last time was pure fun.  I love the banter of this group.  I enjoyed my time with Cassie and Hades  They make a great couple, if a bit stubborn and bull-headed.  Full of action, sexy times and true mates who are finding their way back to each other – this is a story and a series I’d recommend for any Paranormal Romance or Shifter Romance reader.