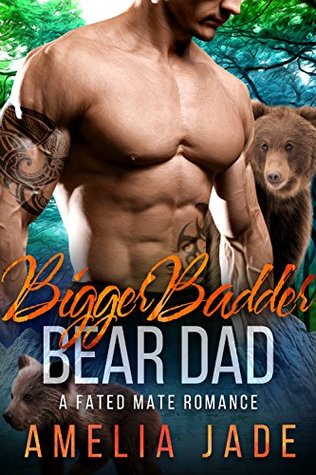 New guards have made the trip to Cloud Lake from Cadia… and among them is a spy, a man on a mission to uncover a well planned out secret that will threaten so many lives.

Since the cover blurb description tells you so much about this story I’m going to simply dive in to my emotional response and reaction to Bigger Badder Bear Dad.  Noah and Angela are a charming couple, the drama comes for them rather late in their story when the presence of the spy is more firmly focused.  I liked this couple, they work together from the very start and their romance flows so naturally.  Angela is a stickler for truth, she reads body language and facial expressions like a professional profiler.  So it’s rather difficult for Noah to not tell her what he’s thinking, even though he’s holding back on the mate part of their relationship.  He gives her truth, even if it’s only an acknowledgement of his complete thoughts.

I didn’t discover the spy in advance, although the field of possibilities was very narrow, still it took until the intended reveal for me to sniff him out.  Politics are always a nasty bedfellow.  With peace comes those who believe a certain way crawling out from under the rocks they’ve hidden under during war.  I sense a pattern for the future, but I’ll wait on that opinion to be voiced in a review.

In all, Bigger Badder Bear Dad was a delight to read.  Noah, Angela and Cooper make a perfect family.  Laced with humor, sexy moments, danger and friendships this is an excellent addition to the Fated Mates Romance line.  I’d recommend this story and the entire set of connected series to any Paranormal Romance or Shifter Romance readers.

I do still have a touch of confusion that I’m finally going to address.  Time Lines.  In Wing Her Over, the first published story in this line, Andrew met his mate, and that set off a chain of events… and a puzzled brow for me.  Although this is not defined as a numbered series, I’ve been treating it that way.  Yet, there is no mention of Andrew’s finding his mate in the rest of the stories.  In fact, he’s almost being felt sorry for as it’s indicated that he still is in search of his mate.  I saw Wing Her Over as a transition story bringing us into the women’s stories who had been duped by the Institute’s actions  Now I’m no longer certain just where Andrew’s story fits.  It certainly makes no difference to the stories at all.  I’m simply confused on the time line and hope at some point that will be addressed.  But that’s my opinion, and my puzzle to figure out – it has no bearing on these amazing stories.