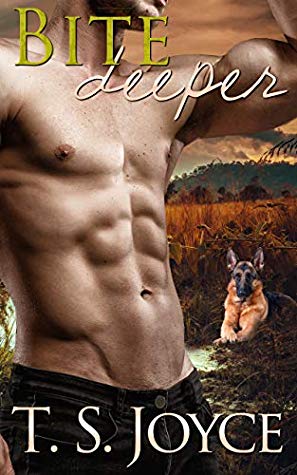 BITE DEEPER is the third and final story in the Keepers of the Swamp trilogy – although, “final” is never a real guarantee that these folks won’t show up again one day, somewhere.  I’ve learned that much while reading T. S. Joyce’s work – never say never.

Cole/Fargo is a fascinating character.  Not really a shifter, more a product of swamp magic but still the human within has an intense life now, one of service that’s turned into an odd kind of friendship with Holt and Liam.  He’s a guardian who will defend this family, mates and future babies included, for the rest of his life.  Or he would have except his past is back in town and life is changing once again.

I always expect the unexpected from T. S. Joyce, and she delivered big time with BITE DEEPER.  It’s an emotionally intense story full of unique friendships, hatred, ghosts, and magic born of desperation.  Mae and Cole were once, and always will be, deeply in love with each other.  Fate changed that and now fate has stepped in once again.  This one will put you through all the emotions possible and leave you satisfied with the end.  I didn’t need detailed closure on the bad guys, I knew from their screams that they got what they deserved, it was enough.  I really hope we aren’t totally done with the small town of Uncertain for I’d definitely like the chance to run into these very special characters again.  I had a blast and if you love Shifter Romance or Paranormal Romance then you should be reading this trilogy.  You’ll be hooked on T. S. Joyce if you aren’t already.  Oh, I saw the special numbers again (did you?) – wonder where we’re going next…