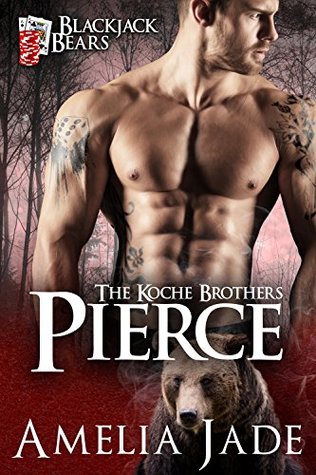 Pierce Koche wasn’t sure where his future led. There didn’t seem many options open to him. After all, he was one of the Koche Brothers, the infamous Blackjack Bears. As the youngest of five, he often found himself dragged along with them wherever they went. The latest place he’s ended up is in shifter jail. Resigned to live out his days behind bars, he’s caught off guard when a group of humans breaks them out. But that’s all Pierce can remember. The next thing he knows, he’s waking up in a forest to see her hovering over him, her lovely brown eyes filled with worry.

Mila Chaire isn’t happy with her life. The company she works for has become something she resents. The jobs she’s being assigned lately have moved further and further into the gray area of what’s legal and what’s not. So she’s taken to renting cabins on the outskirts of her hometown of Longhorne to get away from the stress of it all. On a morning jog she comes across a limp form that will change her life forever. But only if she can convince him not to kill her the instant he wakes up…

The animal in Pierce doesn’t want to follow her into the city; it’s too oppressive and lacking the gentle touch of nature. The man in Pierce doesn’t want to admit his weakness in front of a beautiful woman. But the brother in him will do anything to find his family and bring them back together. A shocking revelation will test his devotion to Mila, but strained as their emotions might be, he knows she’s not just his only hope, but also the only woman he’s ever loved.

The Koche brothers were characters in the Base Camp Bears series, part of the interconnecting set of series abut Cadia and Fenris at war.  In this new series we’ll find out the fate of the Koche brothers away from Cadia after the war has supposedly ended.

The last time we saw the unruly, always in the heat of trouble Koche brothers was toward the end of the Base Camp Bears series where they did something truly stupid and found their butts tossed in jail.  That is where we pick up their story in this new series.

Blackjack Bears: Pierce starts off the next connecting series with an intriguing premise and an interesting couple.  While this story is a part of a set of connecting stories surrounding Cadia there is also a bit of world building for our bears are far from home in a human environment.  It’s not overpowering but there are things to learn about that we aren’t familiar with as in previous series.  I feel I need to be a bit vague and not talk about this story as much as I’d like to – there are things, opinions that could be spoilers for others who have not read Pierce and Mila’s story yet.  I found Pierce engaging while Mila was more difficult for me to connect with, perhaps because of her attitude and my suspicions.  Actually, it will be interesting to see how Mila is portrayed for the rest of the series (we almost always come across other characters at some point).  They make a great couple, I’m just more a Pierce person at this point in time.

A fast paced, action packed story with a slightly new direction, new villains to learn and new mysteries to unravel.  I’m definitely looking forward to the rest of The Koche Brothers series.  I would definitely recommend Blackjack Bears: Pierce for any Paranormal Romance or Shifter Romance reader.