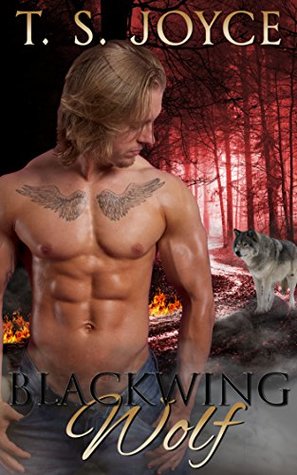 Dustin Porter is walking a fine line between the Blackwing Crew and the Valdoro pack. He’s been sent to betray Kane, but there’s a complication, and that complication is a smart-mouthed beauty who is also vying for a coveted spot on the crew. Dustin can’t keep his attention from Emma for long, and the more he gets to know about her, the more mysterious she seems. She is making him want to be a better man, but he’s in way too deep, and now he’ll have to choose a side. Too bad choosing could get him and the woman he loves killed.

Emma is a human on a mission: make it onto the Blackwing Crew. So when Dustin Porter, sexy werewolf with one helluva sense of humor, suggests they pretend to fall for each other, she’s pretty sure he has the worst ideas on the planet. That is, until his plan works a little too well, and now Emma is in way over her head. Dustin hasn’t been honest with her, and what she doesn’t know could get her hurt, but as she gets to know the witty werewolf, she begins to realize there is more to Dustin than meets the eye.

She’s falling hard for a man destined to betray the crew she loves, and now all that stands between him and oblivion…is her.

Read on for my thoughts on Blackwing Wolf.

I have made no secret of my love for these connected series that bring us to this story.  Just when I think it cannot possibly get better or have a tighter rein on my reading heart – boom – Dustin and Emma come along.  The cover description gives a very good outline of their story – and it would be so very easy to get enthusiastic and give away stuff that I don’t want to… so I have to be careful.

Dustin is that perfect example of the class clown or the joker that inhabits just about every family in some form.  He is the joker, making cracks at usually your expense but occasionally at his own.  His sexual comments and jokes border on truly gross and obscene.  Yet.  If you look closely, in his eyes, the way he phrases his comments you will find a man / wolf who is hurting, deep into the soul hurting and he sees absolutely no way out of his situation, or a future beyond the next few days – if he’s lucky.

Emma is human, and also trying for a spot on D Crew at Kane’s mountains.  She is hearing impaired, but with her hearing aids she can clearly hear Dustin’s comments or read his lips if he’s looking in her direction.  She doesn’t understand her fascination with this man who is obviously a trouble maker supreme and most possibly a huge jerk.  But there’s something about him that draws her, she wants to befriend him for some odd reason – yeah, like he needs a friend when he’s setting out to annoy everyone around him including the end of the world dragon, Kane.  She should just ignore him, after all, she is hiding a few secrets of her own.

Dustin’s secrets are tearing him apart, especially as he falls deeper into Emma’s unique spell over him.  He has nothing to offer her, yet if he could he would give up his own life to keep her safe – and it very well may come to that.

I honestly do not know how to convey just how amazing Blackwing Wolf is, or the unique love and understanding of each other that Dustin and Emma share.  I can say without a doubt that they will save each other, even though they cannot see it all the time, they each will lose themselves in order to protect the other.  What is love if not that action?

If you love Shifter Romance, then Blackwing Wolf and the Kane’s Mountains series should be on your TBR pile.  If you don’t want to take the time or expense of starting from the very beginning – at least pick up  these two series – Harper’s Mountains and Kane’s Mountains.  I believe you will become as hooked on these stories as I, and many other readers already are.