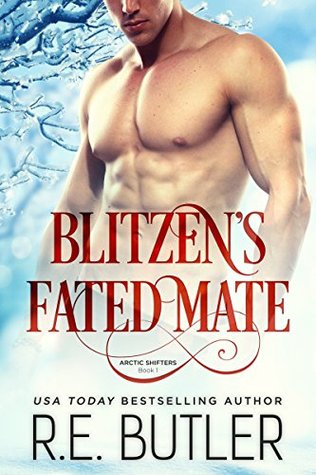 On Christmas Eve, romance writer Charli watches as something plummets into the woods behind her home. When she investigates, she discovers an injured reindeer who quickly transforms into a man.

When arctic shifter Arian’s sleigh harness breaks during the Christmas Eve run, he knows he’s lucky to be alive after the fall. But he’s even luckier to have found his fated mate in the alluring human, Charli.

When Arian contacts his people to tell them the news, he’s surprised to discover they don’t believe that Charli is his mate and are coming to see him before dawn on Christmas Day. Arian refuses to consider a life without Charli and will do whatever is necessary to ensure they’ll be together forever.

Charli lives deep in the woods in the cabin that has become home.  She’s a romance writer, a paranormal romance writer, so she’s familiar with the magic of her own creations… she simply never expected one to drop from the skies!

Arian has made it onto Santa’s sleigh team this year.  Truly an honor and every quad shifter’s goal.  This year’s trip was going smoothly, he was enjoying the magic of their special flight when he heard a sound that sent chills through him… the leather of the ancient harness snapping.  And he plummeted down to the snowy grown far below knocking him out on impact.

Charli had been standing at the window on Christmas Eve, well the very early hours of Christmas morning now.  The scene outside was peaceful and beautiful if a bit lonely feeling.  When she saw a blinding light and the arc of something falling from the sky into the woods nearby.  Without thought she rushed out to see what was happening.  To her surprise a reindeer lay on the ground, obviously injured and dying.  As she knelt beside the animal, mourning the loss of such a beautiful creature she touched its side… and the fur beneath her hands turned into skin as the animal morphed into a man, a very naked, injured man.

Blitzen’s Fated Mate is such a fun, whimsical Christmas shifter tale – I adore it.  Definitely a short story, but a powerful one none the less  I’ve downloaded the second reindeer’s story and have the third on pre-order.  Hey, at only a dollar each I can give myself a treat – and you can too.  This story is a fun, quick touch of Christmas magic, Santa and reindeer included, what’s not to enjoy?

Homecoming In A Fur Coat by Sloane Meyers

Christmas In A Fur Coat by Sloane Meyers

Homecoming In A Fur Coat by Sloane Meyers

Christmas In A Fur Coat by Sloane Meyers