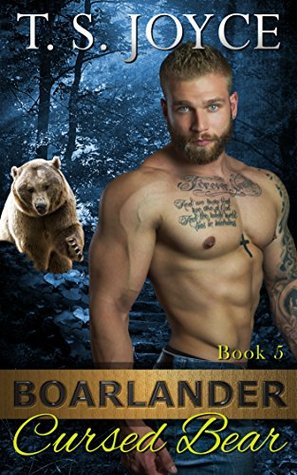 Clinton Fuller has been burned by love, but that doesn’t stop him from thinking of his first mate and what could’ve been. And when she blows into town, with no memory of him or what happened to her, he does his best to stop history from repeating itself. He’s harboring a curse—his bear—and he isn’t right for anyone anymore, especially not some fragile human with a bright future and a legitimate shot at happiness. He can’t drag her through the mud with him again, but Alyssa isn’t taking no for an answer. And now, his dominant, broken animal is putting her in more danger than she’s ever been. He can’t get her out of his head, and now he’ll have to convince her to run if she wants to survive what broke them apart all those years ago.

Alyssa Dunleavy is having dreams of a boy who saved her once, but when she lays eyes on Clinton, nothing makes sense anymore. Half of her life has been erased from her memories, and now the stories surrounding her accident are clashing with what she sees. But as she gets to know the standoffish Crazy Clinton of the Boarlanders, it becomes obvious he isn’t the sweet boy from her dreams at all, but a half-crazed monster grizzly shifter who is working through some major life changes. Even though he makes it clear she should stay far away from him for safety’s sake, she can’t help but be drawn to his animal magnetism. And now she’s falling head-over-heels for a stranger keeping a mountain of secrets…or maybe he’s no stranger at all.

I think it’s safe to say that anyone who has read the connecting series that make up the Damon’s Mountains series has run into Clinton before.  One angry, destructive young man with attitude, sass, arrogance and the need to hurt not only others but himself as well.  The Boarlander crew is Clinton’s last chance before his alpha will be forced to put him down.  He’s now that out of control that it’s only a matter of when no longer if Harrison must make that awful decision.  Then the one woman who could save him appears… with no memory of their shared past.

Boarlander Cursed Bear delivered a heart touching story to make us care about one tortured man, a man who could be the absolute most nasty piece of crap attitude on the planet.  Yet he had a reason, and now we know why Clinton is as he has become.  I always knew there had to be more to Clinton than what we saw on the surface.  But I wasn’t really prepared for why he became so out of control.  No spoilers, simply a very amazing bear finally being reunited with the love of his life, his mate.  I couldn’t have imagined a better ending for Clinton than his Alyssa.

(And since I’m so very late on this final review I needed to catch up on from my binge reading of the entire series back to back – I’ve met his son, and know that Clinton is still the fun loving, prank pulling man I came to love in this story.  And the apple does’t fall far from the tree… so keep on reading the connecting stories, they are all amazing.)

It’s always bittersweet when a series concludes.  And I’ve loved every single story in these connecting stories, met some pretty amazing characters.  But it’s not really over, there is so much more to experience and discover… and I’m loving the journey.  I’d highly recommend Boarlander Cursed Bear and all the stories in these connecting stories set in Damon’s Mountains.