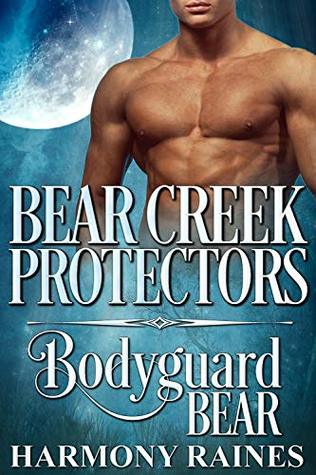 Kate Kellan never wanted to be an actress. Although she is thankful for the life changing opportunity her career has given her, she wants to move on with her life. All Kate has to do is convince her overbearing mom she isn’t crazy to ditch the career that changed their fortunes. But before she can break the news to her mom, Kate is pursued in the darkness by someone who means her harm.

However, when she is saved by Red, an incredibly strong, and incredibly attractive stranger, she isn’t sure if she is being played. Especially when Red confesses he is in town for a meeting about joining Bear Creek Protectors.

When bear shifter, Red, meets his mate, she is suspicious of his motives. But soon he breaks down Kate’s barriers and convinces her he is only trying to protect her.

But as the danger escalates, his services as a bodyguard are just what Kate needs. Along with his body in her bed!

Can they work together to find out who is behind the attacks? Or will they lose their happy ever after forever?

Titles in the Bear Creek Protectors series include:  Bodyguard Bear –

As we neared the ending of the Return to Bear Creek series we began to hear characters mention the possibility of opening a protection based business in Bear Creek… this series is about the men and woman who put their lives on the line for their clients – and most likely their fated mates as well.

As we begin the Bear Creek Protectors series we are introduced to Red, ex-military and a friend of some familiar faces (remember, several characters from the earlier books in the Return to Bear Creek were military).  Red has recently lost his mother and after leaving the military as well he’s at loose ends dealing with his grief, yet knowing he has to start making plans for his civilian life.  He simply never expected to meet his mate as he attempted to save her from a stalker in the park.

Kate has been an actress since she was a young child, she has the success and the fame but not the freedom to do as she wishes.  Now she’s landed a great part in a popular movie’s sequel, and this will be her last performance in front of the cameras.  Oh, she still has to tell her rather controlling mother, but Kate is firm on this – she’s done and ready for a new career of her own choosing.  An innocent walk in the park turns deadly when she realizes that someone is following her.  She makes her escape while being aware that another presence is in the park… friend or foe, she’s not certain.  And it doesn’t help her suspicions when her so called rescuer appears right after the stalker seems to have run off.  Is Red for real or is he the one that’s endangering her… time and trust – and maybe a bear’s instinct about his fated mate will tell in the end.

Bodyguard Bear is a fun story, a mystery to solve and the discovery of shifters for Kate.  We have several suspects early on in this one, and although I had my culprit picked out I still wasn’t certain of my choice until the ending.  Kate and Red are sizzling hot together, and while Kate may not be a shifter she certainly has no doubts that Red is the man or the bear for her.

I had a blast with this new Bear Creek series, it’s going to be a fun ride.  We’ll meet several members of this new protection business, run into some old familiar faces as well.  I always love getting a glimpse of where previous couples are today in their lives.  I had fun with this one, and if you love Shifter Romance then you’ll want to get in on the beginning of Harmony Raines’ newest series.