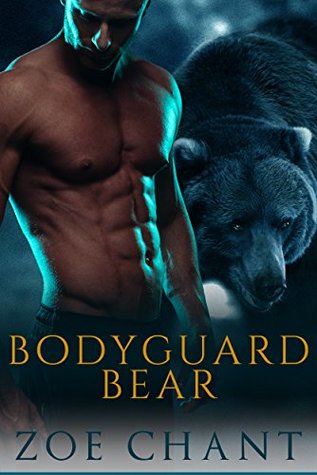 Curvy paramedic Ellie McNeil loves her job, even though her schedule dooms her to perpetual single-hood. But on an overnight shift, she witnesses a murder. Ellie bravely agrees to testify against the murderer, who runs organized crime in her city. But she’ll need one hell of a bodyguard to make it to the witness stand alive.

Growly bear shifter Hal Brennan runs Protection, Inc., an all-shifter private security company. A former Navy SEAL, he left his clan’s wilderness home for a life of danger and excitement. His parents keep calling and pestering him to look for his mate, but Hal is convinced that he doesn’t need anyone. Then he’s hired to guard Ellie. Now the bodyguard bear has a true challenge: to protect his mate… and open his heart.

Hot shifters who love their mates, emotionally and physically – a lot – 18+ readers

Read on for my thoughts on Bodyguard Bear.

Ellie is a paramedic who at the end of a long shift witnessed a murder and the murderer discussing that hit with the man who ordered it.  While that’s bad enough, what makes this an even deadlier situation for Ellie is that the man who ordered the hit is the equivalent of a godfather-like-figure.  Ellie’s life is in danger but she’s not about to hide or ignore what she saw.  The only other option, private protection until the trial.

Hal is getting pretty good at avoiding his parent’s not so subtle hints about mates and grand-cubs.  But eventually the conversation is going to come up.  Hal is an adrenaline junkie – he’s not a shifter who is going to be comfortable and content in the forests.  He needs to be part of the action so putting his strength, cunning and intelligence toward his business, Protection, Inc. makes much more sense to him.  This new case would be interesting as someone was finally brave enough to take on a very dangerous criminal, and see it through to the trial.

What Hal never expected was to look into Ellie’s exhausted eyes and immediately recognize his mate.  Emotionally it was exhilarating to know his mate was so brave and in so much danger.  He would protect her with his life, but she was human so he’d need to ease her into the knowledge of his bear.

Ellie might be practically asleep on her feet, but that didn’t stop the realization that this bodyguard was hot and the fantasies were already forming in her imagination about happy ever after.  As Ellie and Hal spend time together, their emotions will take over and one hot, sexy and loving night won’t be enough for this new couple.  Neither expected to find that one person perfect for them under these circumstances.  And what Ellie really wasn’t ready for – to be running for her and Hal’s life

Bodyguard Bear is a lively, intriguing and entertaining beginning to the series Protection, Inc.  Hal’s team at Protection, Inc. is an amazing collection of various shifters and I cannot wait to meet them all.  Hal and Ellie are a strong couple who compliment each other in so many ways.  It takes a very strong woman (or person) to go up against a criminal who is willing to kill people, and most likely will try to kill her.  Hal will do anything to protect his mate and he proves that as this story unfolds.

I enjoyed this one very much.  Hal and Ellie are both hot and sexy together – they act like mates from the very beginning, even before Ellie knew Hal was a shifter.  If you like your shifters protective and hot – and their mates smart and sexy, then you’ll enjoy Bodyguard Bear.  A lot.