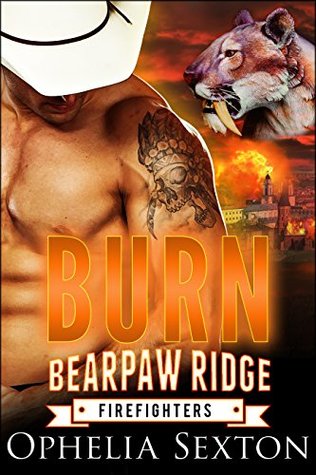 Bear shifter Elle Swanson’s no stranger to heartbreak. She’s been widowed for many years. A second chance at romance? She’s not holding her breath. But at the most unexpected moment, love comes walking in. At a family wedding, she’s swept into the arms of tall cowboy Justin Long. Between his smoldering good looks and seductive caresses, she’s falling hard. Except for one big problem.

Justin’s a sabertooth shifter. Elle knows they’re pure trouble. Sabertooths have threatened her family in the past, and she can’t risk their safety, no matter how much Justin sets her senses ablaze.

After losing his mate in a tragic accident a decade ago, Justin believed he’d lost his one shot at happiness. But when he glimpses the lovely woman at his daughter’s wedding, he can’t believe his eyes. Could this be another chance at love?

Elle’s beautiful, strong, mature, and sexy—everything he craves in a mate. He knows she’s wary of sabertooth shifters, but vows to court her and claim her.

But just when he thinks he’s won her heart, his past—and vicious sabertooth politics—catch up with him. Suddenly, Justin finds himself fighting not only for his life, but for the future of his kind. Can Justin defeat the sabertooth threat or will his and Elle’s happily-ever-after come to a swift and violent end?

*Author’s Note: It’s recommended that you first read Flame (Bearpaw Ridge Firefighters Book 4), as this story begins immediately after the end of Flame.*

I enjoyed Burn for many reasons, and on different levels from the previous stories in the Bearpaw Ridge Firefighters series.  And I believe if you’ve read this series from the beginning you’ll get my reasons very easily.  In itself it’s a fast paced story of two people discovering that they can have a second chance at love even after their mates have died.  Life does indeed still move on, years later perhaps, but there are always possibilities.  On another level this story gives a satisfactory close to a pride of sabertooth cats that were living in the past as far as their actions went, and were under the control of some very evil people.

The mothers of the men in the previous stories were portrayed as strong, stubborn women… perhaps with a bit of an attitude problem.  In Burn we get to see them from a different viewpoint, and on some level acknowledge that they were left mate-less with children to raise and they managed to do that and keep their businesses afloat for the next generation to take over.  I admit to not always being sympathetic toward Elle or Margaret in the past.  Hard-headed comes to mind in describing these sisters, and that’s on a polite day.  In this story they’re a bit softer, a bit more willing to do the right thing even when it means going against the opinions of their kids.

Elle and Justin make a fun and unique couple, yet another pairing of a sabertooth cat and a bear – who would have ever believed it?  *grin*  It’s always a treat for me to see the more mature characters get their moment in the sun, to find love and passion at any age.  And some of the scenes with Elle’s children, particularly Mark are just sputtering laughter worthy, and the kid’s finally growing up moments as well.

Burn is a story that I had fun with, enjoyed seeing characters from a different perspective as well as a touch of danger, closure and new beginnings.  I do have to agree with the author’s note in that this one should be read immediately after Flame for one story flows into the other almost seamlessly.  I would recommend this story and this series to any Paranormal Romance or Shifter Romance reader who enjoys diverse characters, love at any age, a touch of danger and some precious family moments, plus the sexy moments are well worth a read.