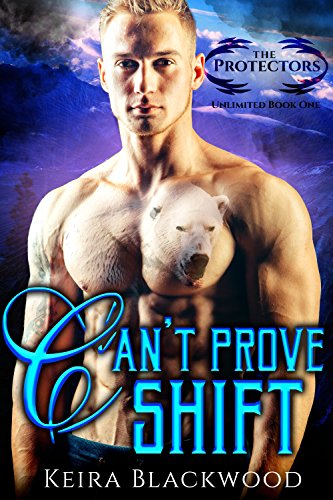 Caitlyn Moreno’s no stranger to trouble. It’s part of the job for any cat burglar, let alone a thief who’s literally a cat. Well, ocelot shifter. No lock is beyond her capabilities, no mark beyond her reach. When rumor has it that the priceless Vandervelt broach will be kept for two nights in a hotel safe, guarded by shifter mafia, Lyn is compelled to make it hers. One mistake could cost Lyn her life, or worse, land her drugged, tossed in a crate, and dressed as… a bride?

When Tribunal enforcer Mason Blake returns home to his Alaskan cabin from a stressful assignment, he looks forward to a peaceful, quiet break. Alone. But a surprise late-night delivery leaves the anti-social polar bear shifter in an impossible situation—a gorgeous woman on his doorstep. Shut the door or let her in? Either way, she’s bound to be trouble.

We’ve met the Blake “brothers” before – if you haven’t yet read Riverwood series, now might be a good time 🙂

I freely admit to having a soft sot for the Blake “brothers”, so I was certainly excited to have their personal stories finally told.  I’m a reader who loves secondary characters, they add so much to a story or a series.  When those former “in the background” characters get to shine in their own series – then I’m one happy reader.

First up is Mason’s story.  Always a loner, Mason works best in a solo mission and usually one in a very cold location.  His last mission has left a bitter taste that he cannot shake off.  So a retreat to his cabin high in the Alaskan mountains is a welcome break.  What he didn’t expect was someone to barge into his seclusion leaving a box on his doorstep.  Not just any box either – no, this one held something far more precious than beef steaks.

Lyn is good at what she does – usually.  A cat burglar only has so many lives and this time she’s been caught by just about the worst possible person.  As a result she’s ended up in a box, wearing a wedding dress dropped on a cabin’s doorstep in the frozen middle of who knows where.  Knowing who it is that she was trying to steal from, the wedding dress comes as no real surprise – she’s been sold and this highest bidder better be prepared for broken body parts once she’s out of this box.  Thing is she’s released from the box and… left to do as she pleases – walk down the mountain, come into the cabin – hide in the wilderness… none of which are exactly appealing options but at least she hadn’t been welcomed as a “bride” so far.

Can’t Prove Shift is full of the witty bantering and sexy couples that I’ve come to love and expect from Keira Blackwood.  Mason isn’t much for words, but his actions speak loud and clear.  And right now, his actions are saying this woman’s mine and I’ll protect her no matter what comes at us.  Caitlyn is a unique woman who can usually handle life on her own terms.  Yet now she’s faced with a decision – to keep running or letting someone care enough to keep her safe while she does the same for him.  It’s really not a difficult decision.  You’ll find a compelling couple, some nasty villains, an interesting plot and a few surprises tossed in for good measure.  I’m looking forward to Lincoln’s and Mia’s stories soon.  Lincoln has always had an air of mystery and seduction about him and his mate will have to be something amazing.  Mia is going to be an interesting story for she is the most unknown of all the Blake “brothers”.  She is a mystery that I’m looking forward to unraveling.  So the look ahead for the remainder of the The Protectors Unlimited series is very anticipated by this reader.

If you’re in the mood for a good, solid Shifter Romance with action, danger, a touch of mystery and certainly a sexy couple then Can’t Prove Shift should be on your reading radar.  I would highly recommend this story and suggest you get in on the beginning of this series from the start.  And if you haven’t yet discovered the Riverwood series, now would be a good time to correct that oversight.