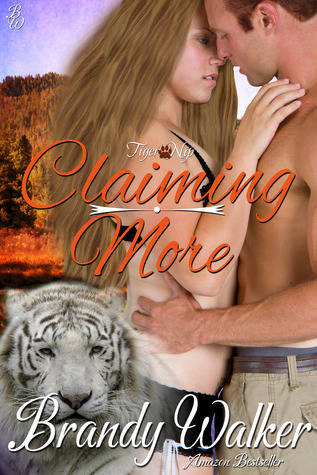 Sampson Hart has known Mary Jane Poppy for ten years. She’s his sister’s best friend, business partner, and has had a crush on Sam for years. When the mating pull hits him, he’s ready to claim her as his own. Given their history, it should be simple. Right?

MJ has loved Sam since she was fifteen. But being a hybrid, she’s been told all her life she won’t have a mate. When Sam proclaims she belongs to him, she doesn’t believe it; the mating pull isn’t there, and Sam isn’t meant to be hers.

Running back home to escape the love she feels for Sam, MJ agrees to become the companion of a man who lost his mate and has three young children to raise. It is the only way to set Sam free to find the one he is truly meant to be with.

Claiming More is such an emotional read.  We’ve met Sam and MJ in the first story in the Tiger Nips series, Craving More.  They have knows each other since childhood and perhaps MJ has loved Sam just about that long.  But over the years they’ve fallen into constant digging bantering arguments whenever they’re around each other.  Sam loves to tease and get a rise outta her, and MJ just has to fight the attraction by fighting Sam – on just about everything.  But things are changing and Sam has acknowledged, at least to himself, that MJ is his mate – now he just has to figure out how to convince her of that fact before she goes and does something totally stupid – like accepting the companionship of a widower with children instead of Sam.

For the majority of her life MJ has never been good enough just as herself.  As a hybrid, her Liger has been the source of family embarrassment and worse over the years.  Now she hardly ever lets her cat out and that is hurting them both.  Her parents have convinced her that she’ll never have children of her own nor a mate who loves her.  All she can hope for is second best companionship from a man who lost his mate but wants a companion as well as a mother figure for his children.  She loves Sam with all her heart, but she knows that when he finds his mate she will be devastated at the loss of what might have been – so she’s seriously considering Devon’s proposal.

My heart wept for MJ.  She believed the lies and accusations that had been tossed at her, and finally just wanted to give in and follow her parent’s wishes – maybe then they’d love her for who she is, a dutiful daughter.  Watching Sam change over the story was a delightful experience.  He goes from blustering “I know I’m right” aggressiveness to finally an understanding of what MJ’s been going through – and he finds a way to help her, out of love, with no strings attached.

MJ had been conditioned by actions, words and lack of true knowledge to believe the lies and half-truths she’d been told throughout her life.  The way in which MJ learns the truth about being a Liger was stunningly perfect for her.  She  would never have accepted anyone else’s information as possible truth – so this tension filled delivery was such an eye opener for MJ and the reader as well.  The transformation was emotionally heart-wrenching – and I admit to some tears flowing during this amazing love story.

If you love Shifter Romance with a lot of emotional punch and a really compelling story then Claiming More should be on your reading list.  This is a story that I would read again, just to get the little bits that I might have missed the first time in my rush to know what happens.  It’s that good.