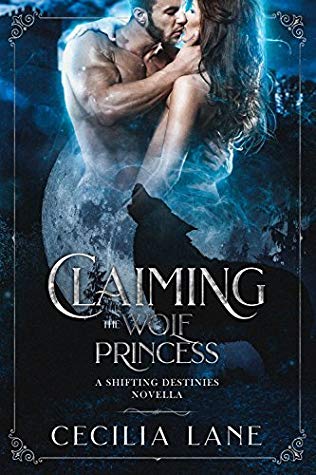 CLAIMING THE WOLF PRINCESS is part of the Shifting Destinies universe.  While this story is novella length it does pack a powerful tale into that smaller framework.  There is a point where this story has a strong Sleeping Beauty feel to it – and that unusual twist is part of the reason why I will always turn to a story by Cecilia Lane.

Rory is a princess born into a shifter family yet has never shifted into or felt her wolf form.  Unfortunately, she was cursed at birth by a Fae and her parents strongly believe in that curse and have practically abandoned Rory who is seen as less than any other member of the pack and is often looked down upon in pity or completely dismissed as unimportant because, after all, that’s how her parents – the King and Queen – treat her.  Only her brother, Finn stands with her, and even then when it’s convenient for him.  She’s returned home a day early due to some drama in Denver and she’s going to go to the Summer Solstice Ball even if her parents forbid it.  She has no idea that defying them is going to change her world forever.

Adrien is everything I adore about dragon shifters.  Handsome and sexy, of course, but prideful in a strong way, determined to protect his mate at any cost, and stubborn until the end of time.  He’s going to need all of those qualities as he fights for his mate against all odds.

I had a very good time with CLAIMING THE WOLF PRINCESS.  It’s a quick-ish read but the story is compelling, Rory and Adrian are richly described characters who just work as a couple.  There is a very real danger, questions finally answered, and an eventual happy ending for our couple.  If you love a good Shifter Romance then this is one you’ll want to check out.