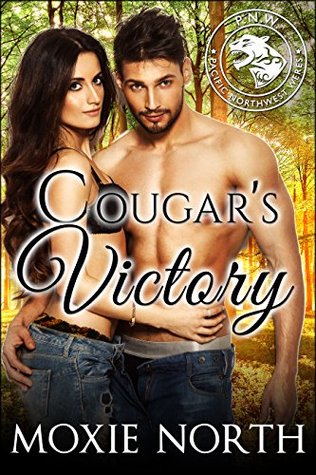 Dax Hayes knew what it meant to be the Alpha of a cougar pack. He also knew that his responsibilities to family were his first priority. But Dax wanted more. He’d been around a long time and he simply wanted to find his One. His one true mate to start a family with. A temporary break and a fresh start was just what he needed.

Life had a way of kicking you when you were down. At least that’s what Effie Parks had come to believe. Growing up with a mother in jail and foster parents who weren’t cruel, but weren’t kind, left her fighting for every scrap of happiness. She didn’t ask for much, her needs were simple. Until she met Dax.

Do opposites attract or are some hurdles, human and shifter, too big to overcome.

Read on for my thoughts on Cougar’s Victory.

Ah, it was so good to run into Dax again.  This sexy cougar needs his mate, he might be the Alpha of his pack but no one should have to go through life alone.

Dax has walked away from his family’s vineyards, for awhile at least.  He’s been waiting for his mate but she doesn’t seem to be anywhere near home or the expensive, high society places his mother is looking for her in.  So, Dax has set out on his own, bought up an old, smaller vineyard and begun to create his own line of wines.  Great wines, but for the average customer not for those that can afford only top shelf bottles.  Vine should be enjoyed, not hidden away in collections.

He’s also hoping to track down his mate.  He figures since she isn’t anywhere near him then he’s going to have to get out into the world and find her.  He’s lonely, he wants the commitment, family and love of his mate.  It’s time to go on the hunt for her, because she’s out there, somewhere.

Effie’s life has been hard, there is no doubt about that.  But she’s on her own now, well on their own since she and her best friend Cassie share an apartment and a friendship closer than most relatives.  She has just scored an amazing graphic design contract with the very handsome, very rich Dax Hayes and her life is about to change, for the better, forever.

Dax knew as soon as the curvy, beautiful woman stood up from behind the conference table.  His mate.  While she might not have understood the insta-lust that sprang up between them… Dax did.  And he lost no time in beginning his courtship of the woman who was fated to be his mate forever.  Human.  Okay, his mother would be a bit upset by that, but so what.  He was Alpha, this was his mate and that was the end of that discussion as far as he was concerned.

A crazy, dangerous ex-boyfriend and a stuck up, stubborn mother will do their best to mess up this romance.  But no one and nothing comes between Dax and Effie..no one.

Cougar Victory was such a fun story, shifters are some of my favorite paranormal romances and a hot, sexy, alpha… heaven.  Dax and Effie are mated, intended only for each other.  And they will face a few challenges along the way.  But this is the sexy, hot and steamy romance of two people meant to be together.  It was a fun moment when a few of the characters from the Pacific Northwest Werebears series showed up.  Always good to know bits and pieces of old friend’s lives as we move on to new stories.

If you love shifters, if paranormal romance sends a special tingle down your spine then you’re going to enjoy the next Pacific Northwest series and especially Cougar Victory.

(This title was originally reviewed on my Haunted Bookshelf blog.  I wanted all of my shifter romance reviews in one spot, so this title was brought over here to Shifter Haven.  Both reviews were written and created by me.)