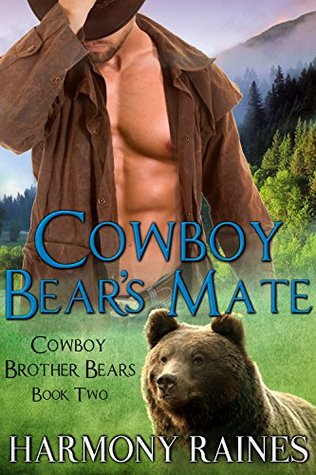 How does a bear lose his mate? When she drives off in the opposite direction, taking his heart and soul with her.

For a year, Samuel has lived with the loss of his mate. He’s roamed the mountains, always searching, his life meaningless without her. Now he’s made a decision—he’s going to leave the Williams Homestead and search the world until he finds her.

Then, fate steps in. She’s here, staying in a small, local, hotel. The only problem, she is with another man, a man who needs her.

Is there anything crueler than a messed-up fate?

Life hasn’t always been fair to Zoe. But she’s made the best of it. So, when fate puts the handsome hunk of a cowboy Samuel Williams in her path, she is torn between her attraction to him, and her duty to Jeremy. Can she have her own happy ending, for once in her life, without anyone getting hurt?

We first met Samuel in Cowboy Bear Blues, at that time he seemed so sad and couldn’t really hide that fact from his family.  Now we understand where that sadness comes from.  During a run in his beloved mountains in his bear form, Samuel came across his fated mate.  But she was with another man.  Before he could safely shift and meet them human to human they’d gotten in their car and drove away.  For nearly a year Samuel has been spending more time in bear form roaming the entire area around the mountains in the hopes of picking up her scent once again.  The very last place he expected to find her was at his brother’s in-laws’ newly opened hotel.

Without giving too much of the story away, Cowboy Bear’s Mate is such a lovely combination of bittersweet, hope and completion.  There is a reason Zoe was with another man, a quite obvious one that Samuel never thought of – yet, there is also a sadness to Zoe as life has dealt her and her loved ones some serious blows lately.

I loved Samuel and Zoe together, they fit and that’s always comforting to see.  Family is such a gift, and we get to know Zoe’s family and reunite with members of Samuel’s once again.  It’s the secondary characters, or ones from previous stories that show up again that bring a story to life for me.  If you have a love for Shifters and their mates, then this story and this series is one you’ll want to get your hands on.  A good story, interesting characters definitely sexy times and that ‘feels good’ experience await you in this series.

Craved By The Bear by Terry Bolryder

Craved By The Bear by Terry Bolryder