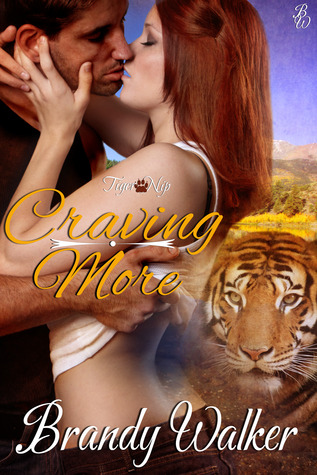 Corrine Hart is ready for few days off for rest and relaxation. At the top of her to-do list is spending as much time as possible in tiger form and doing her best to banish all thoughts of the mysterious Hunky Cupcake Guy who spent the last two weeks driving her libido insane.

Jett Montgomery-Murphy just wants to know if the tasty treats that keep showing up at work are the same ones his best friend used to get while they were in college. A trip out to Sweet Confections confirms what he thought and brings him in close contact with the one woman he’s secretly lusted after for years, his best friend’s sister Corrine.

A late night tryst leads to two tigers finding their mates and two humans unsure what to do next. Add in an overbearing brother, a best friend with her own drama, and a crazy ex-girlfriend that has a checkered past and you have a recipe for disaster.

Will Corrine and Jett be able to overcome the unexpected obstacles on their way to falling in love? Or will they throw in the towel before the relationship even gets off the ground?

Read on for my thoughts on Craving More.

Corrine was in her Tiger form enjoying a late, lazy afternoon run on her property, stretching in the warm sunlight, taking a dip in the cool waters, drying off on the fading warmth of a large rock and taking a short cat nap in the now evening part of the day.  She scented him first, then saw the massive tiger shifter standing nearby simply watching her.  Anger was her first reaction, that he dared invade her privacy, her sanctuary then that small shiver of fear that could not be ignored as he continued to stand and stare at her.  Just as she was making the decision to fight or run, he shifted… into the handsome man who’d been in her bakery daily, the one she already had a bit of a crush on.

So begins Jett and Corrine’s romance.  While their animal halves may recognize each other as mates at first sight, it’s gong to take the human sides a bit longer to come to that realization.

Corrine is a strong, independent woman who runs her own business, Sweet Confections, along with her best friend.  Her delicious cupcakes, muffins and other goodies have been the delight of her family for years and now she’s bringing in a growing customer base with her bakery.  She’s noticed the handsome man coming in every day for “goodies for the office”.  Hard not to notice his sexy smile and constant goodbye wink.  But so far he hasn’t done more than smile and wink, so Corrine’s fantasy remained in her own head… until he showed up in her backyard in his tiger form.

Jett has known about Corrine for years, although they’d never met.  Her brother Sam is a good friend, and her care packages to her brother during their college years were famous for her delightful bake goods.  When he moved into town and began his new job the goodies brought into the office were familiar to him and he sought out the source of those memories the cupcakes invoked.  He never expected his tiger to sit up and take notice, let alone hear mate and forever constantly in his head from that pesky feline… until the night he followed his tiger’s instincts and tracked her to her home and made his move.

Craving More is a fun, sexy romp through those awkward first days of a new love – nothing is ever truly easy, but getting to the happy ending is the fun part of the journey.  Corrine sees herself as purely average, nothing special about her to attract the handsome Jett.  On the other side, Jett knows his attraction for Corrine – it’s his past that’s getting in his way.  Jett has a stalker, psycho ex-girlfriend who has caused him a lot of trouble and second thoughts about that forever commitment he’ll one day need to make to his mate.  World building and secondary characters are important to me when committing to a series.  The secondary characters in Craving More are delightful and well fleshed out giving me enough of a glimpse to look forward to as I continue the series.  World building is lighter, yet there is enough to tell me that Shifters are out and about in this world, still trying to remain somewhat private but not afraid of the humans they share this world with.  And there is a Guild within this world to police and deal with Shifter problems.

While there were a few times that I wanted to grab Jett by the scruff of the neck and deliver a few growls in his face about not walking away from issues but dealing with them at the time – I did “get” why he often reacted badly to situations.  Overall, I enjoyed Craving More very much, enough so that even though this copy was gifted to me by the author, I went out and purchased the next story and the holiday novella in this series last night.  I think that should say something about what I feel about the Tiger Nip series.