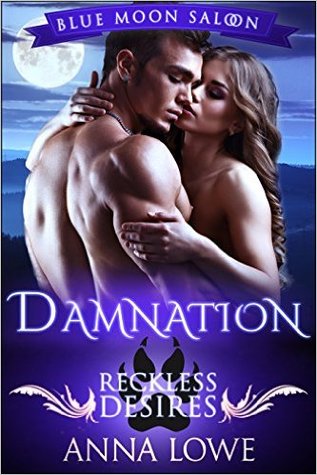 Jessica Macks is a she-wolf on the run from a band of murderous rogues. When she finds a job at a shifter bar, it seems like a safe haven from her hunted life on the road. But the minute she walks through the swinging doors of the Blue Moon Saloon and comes face-to-face with the man she once loved, she’s tempted to march right back out. No way, no how is she risking her heart to that infuriating alpha bear again.

Simon Voss thought he lost everything in an ambush months before: his home, his family, his past. His new job at the Blue Moon Saloon is a desperately needed fresh start on life. Then along comes Jessica, the irresistible she-wolf his clan forced him to reject years before. When Simon is obliged to hire Jessica and work side by side with the one woman to ever make his bear go wild, he’s half in heaven, half in hell. He hasn’t forgotten her, and she sure as hell hasn’t forgiven him. Is this just another path to heartbreak or his last chance to claim his destined mate?

Life hasn’t been exactly kind to Jessica or her sister, Janna, recently.  Both wolf shifters are on the run from a rogue group of fanatics calling for shifter racial purity – and wiping out those packs, clans, people who do not, in their mad opinion, adhere to purity.  The sisters’ entire wolf pack has been killed and burned out by these madmen.  By sheer luck they survived, only to look over their shoulders constantly on the run looking for a safe haven to settle and rebuild their lives.

Simon loved Jess with every fiber of his being,, even to this day.  When they had foolishly believed they could convince their pack and clan to allow a merger between them in the form of a destined mating, the lovers had overlooked one vital detail.  The Elders of each had their own ideas about this merger – and the second son was not good enough for Jessica’s father.  Oh, he agreed to the mating, but to Soren, Simon’s brother and the eldest.  No one told Jess though, and as he did his best to stop her love in the face of what was to come for them she still believed he’d betrayed her.  Then their worlds exploded as each other’s pack and clan were destroyed by the purists who would kill before they would see two different shifter races mate.

So here she was again.  Alive, angry and still not knowing everything except his betrayal.  It would be best if the sisters simply moved along, but stubborn pride was something Jessica excelled at.  It was going to be a long, rough road to gain her forgiveness… and maybe her love once again.

Until the crazed rogues track them down – and life will never be normal again if the purists have their way.

If you love Shifter Romance then Damnation should be on your reading radar.  It’s a good, solid story with lively characters and is a great beginning to the Blue Moon Saloon  series.