Danger In A Fur Coat by Sloane Meyers 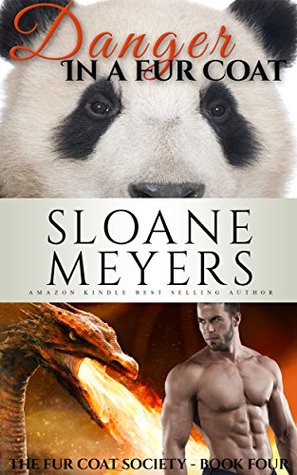 Panda Shifter Juno Harrington risks the anger of her entire clan when she sneaks off in the middle of the night, stealing their only helicopter in the process. She’s always played by the rules, but the world is falling apart right now, and there’s no time for rules. Determined to find a cure for the flu epidemic sweeping the world, she makes her way to her old stomping grounds in Chicago—and quickly realizes she’s in way over her head. Not only does she have to fight for food and shelter, but she has to fight to stop the inescapable flood of passion she feels when she meets the gorgeous, obnoxious, and absolutely irresistible Wyatt Robinson. To complicate matters further, he’s the only one who can help her access the lab with the data she needs to finalize a cure.

Dragon Shifter Wyatt Robinson has been hiding out in Chicago since the war on shifters started. Cunning, firebreathing, and fearless, he’s been comfortable in his role as unofficial ruler of the abandoned city. But when a beautiful bear shifter shows up and announces she’s there to save humanity, he’s thrown way out of his comfort zone. He’s not so sure humanity deserves saving…and he’s not so sure he’s ready to shake up his happy, solitary existence for a spirited bear shifter.

Can Juno convince Wyatt to help her before time runs out to find a cure? And can Wyatt get his ill-tempered nature under control before he sends his one chance at true love up in flames?

Read on for my thoughts on Danger In A Fur Coat.

What human authorities have dubbed the “Bear Flu” has killed millions across the world.  Large cities are now merely skeletons with the remaining humans slowly dying.  The ironic thing is that although Shifters have been blamed for creating this virus in retaliation for the attacks on Shifters, in fact Shifters are immune to it’s effects.  And in the end, it may be that this small band of Shifters will bring about the cure for the humans they share the planet with.  It’s worked for one of their own, a human friend who fought the Bear Flu and with help from his Shifter friends’ medical genius now is healthy and alive.  They are determined to get this cure out to the world, but first comes the need to recreate it in a lab and produce not only the cure, but documentation that Shifters saved humanity.  This is where our brave panda Shifter, Juno comes into the forefront.

Juno was a scientist.  She knew exactly where she’d find the equipment, and even the subjects she’d need to refine the cure they’d discovered.  She also hadn’t found her mate.  And that was one of the main reasons she was out here stealing the only means of transportation her friends, her clan-mates had to quickly get into Chicago.  The two friends who were to make this trip with her in a few days had mates.  This was dangerous and Juno simply could not let them put themselves at risk when they had mates to love and live for.  She would take this risk alone, they’d understand… eventually.

Wyatt made his usual patrols through the mostly empty streets of Chicago.  There were humans dying all around him, he could smell them mostly, a few troublemakers always survived… for a while at least.  And he’d done what he could to help those under attack over the past few months.  Now there was a different scent in the air, one he’d never thought he’d encounter.  His dragon was screeching Mate, while his human side declared no way.

Juno and Wyatt’s romance shows a bright spot in a desolate, destroyed world all because of one mad man’s obsession with eradicating a species he simply didn’t understand and feared.  Although Danger In A Fur Coat turns the tide for humans and Shifters alike, it is for me the saddest story of this series.  It brought home, for me, very sharply how one person could actually change the world with their fear and hatred.  I’d say I’m glad this is only fiction, but we all know human nature too well unfortunately.

The adventure and the danger isn’t over yet for our bank of young professionals.  Juno has cured a human, but now comes the difficult task of convincing a world that Shifters truly never meant harm to humans – and in fact will be the one group that saves humanity.

I adored Wyatt.  He’s a bad boy in shining knight’s armor.  Juno’s bravery might have seemed foolish in the face of the odds against her.  But she proved herself many times over, and discovered that there was indeed a mate just waiting for her to rescue him too.

If you love Shifter Romance then you’ll enjoy this next story in The Fur Coat Society series.  While events flow from one story to the next, it might be a bit confusing to read this out of order.  So as always, I’d highly recommend this story and series but suggest that you start from the beginning for the maximum effect.