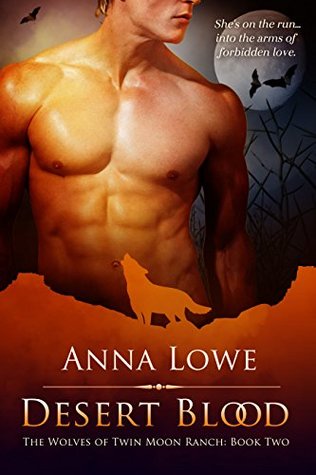 Heather Luth knows nothing about the paranormal world until one awful night changes everything. Now she’s on the run — straight into the arms of forbidden love. Her mind knows better than to fall for Cody Hawthorne’s sunny smile and mesmerizing voice, but her heart — and destiny — have other ideas.

On the surface, Cody is warm, witty, and fun, but beneath his carefree facade, Heather sees a real man struggling to break free. Day by day, Heather and Cody grow closer and closer, unable to resist their simmering passion — while day by day, a serial murderer closes in on his prey. Duty fights desire; fear wrestles trust as the human world clashes with the paranormal in a tale of forbidden love.

Heather is on the run from absolute evil – a supernatural creature who drained her best friend of blood and left her ripped apart body behind.  Now he’s after Heather.  She’s found, at least, a temporary sanctuary at Twin Moon Ranch as a teacher to the children of the family and the ranch staff.  What she, as a human, has no idea of is that she has trusted her safety to another species of the supernatural and this time she’s found the hero in a shifter wolf pack.

Cody is accustomed to being overlooked and underrated.  He may be the son of the pack’s old Alpha, but that doesn’t amount for much more than being told he’s worthless and to follow the rules or else.  Yeah, he acted out in his younger days, but now he’s reached the point in life where he’s searching for something more, something that is his alone.  And he’s found her in the most unlikely human ever.  How can Heather be his mate?  His wolf insists on it, and Cody certainly finds her desirable – but he’ll be breaking pack rules if he pursues her.  But really, when has that ever stopped him.

It soon becomes apparent that the evil chasing Heather has found her.  Now she has to depend on the one man she shouldn’t love, shouldn’t trust but does to protect her… perhaps for the rest of their lives.

I really liked Cody and Heather.  I’m always one who is on the underdog’s side from the start.  And Cody can certainly hold his own, and his brother is on his side, for the most part.  But dear old dad is a… let’s just cal him a pain in the butt to be polite.  As Cody and Heather grow closer, trying out this intense attraction they feel for each other, danger is getting closer as well.

Desert Blood brings us extreme danger, an evil villain, a closer look at several other pack members who will certainly have their own stories told one day, and brings in previous couples as well for an overall continuing of life in the pack.  The action is fast paced, the sexy moments hot and steamy and the love is real and long lasting.  What more could you ask for?

If you love Shifter Romance and haven’t yet read The Wolves of Twin Moon Ranch or the connecting series, Blue Moon Saloon – what are you waiting for?  There’s a new title being released in March 2017 for this series so you really should get caught up before then.  You’ll find a good story line, engaging couples and interesting secondary characters, plus some bad guys to totally loathe.  It’s a win all around.  I’d definitely recommend this title and these series to any Shifter Romance reader.