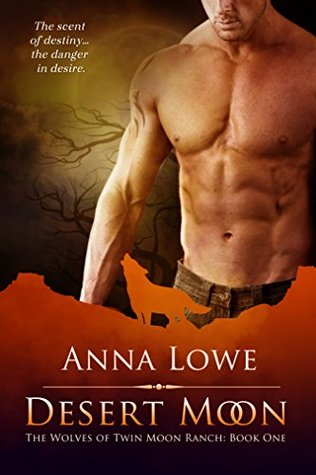 Lana Dixon knows well enough to steer clear of alpha males, but Ty Hawthorne is as impossible to avoid as the sizzling Arizona sun. Her inner wolf just won’t give up on the alpha who’s tall, dark, and more than a little dangerous. One midnight romp under the full moon is enough for Lana to know she’ll risk her life for him — but what about her pride?

Ty puts duty above everything — even the overwhelming instinct that says Lana’s the one. She’s the Juliet to his Romeo: forbidden. And with a pack of poaching rogues closing in, it’s hardly the time to yield to his desires. Or is love just what this lonely alpha needs to set his spirit free?

There’s more than meets the eye on Twin Moon Ranch, home to a pack of shape-shifting wolves willing to battle for life and love.

Desert Moon is the first story in The Wolves of Twin Moon Ranch series – although, Desert Hunt is the prequel story, and one that I definitely recommend you read as well.  I’ve read this entire series now, along with the connecting series Blue Moon Saloon… all are excellent, believable, solid Shifter stories that will capture your imagination and easily get you hooked on Anna Lowe’s works.

The Twin Moon Ranch pack is lead by it’s old Alpha who holds the reins with an iron fist.  He’s beyond arrogant, at times cruel in his judgement and for the most part is just this side of a tyrant.  To say I didn’t like this guy, and felt that he brought about a lot of the pack trouble by his actions… and I never had an ounce of sympathy for him throughout the series would be an understatement.  Yeah,  I didn’t like him much.  Yet, he is the perfect foil for the up and coming Alpha, his son Ty.

It is time for Ty to take a mate and perhaps control of the pack.  His father is sneaky enough to try to make this an accomplished deal without Ty’s knowledge or permission.  The old man doesn’t believe in fated or destined mate nonsense, but in strong alliances.  Ty does believe in a true mate, in fact he’s scented his mate on the property a few years ago, yet has been unable to find her.  He’s holding out for his mate, but time is running out and soon he’ll be forced into a union that will leave him half a man without his true mate.

Lana is returning to Twin Moons with her nan.  She’s been here before on a visit, and at that time she was certain she’d picked up the scent of her mate but never met him.  Now she’s back, and if the fates are kind, she’ll find her mate again.

Desert Moon has all the qualities that make a great story and a series to follow.  Fated mates, an enemy’s offspring, a veiled threat from within the pack, an outside nuisance in rogue shifters, and a cast of secondary characters that bring this pack to life with everyday needs, bantering and infighting.  This is a world that was built through the characters interaction with each other, some surprises yet to come and enough sexy moments between Ty and Lana to bring them together as the new Alpha couple with ease and a natural feeling.  I really enjoy this world – it’s deadly yet forgiving, solid yet flexible, loyal with enough infighting to be natural, and vibrant in the descriptions of the surrounding areas.  It’s easy to simply step into this world and dive into the current story.  That is part of what brings me back to a series again and again.

Without a second’s hesitation I would recommend the entire Wolves of Twin Moon Ranch series to any Shifter or Paranormal Romance reader.  You’ll find a good story, believable characters and intriguing story lines.