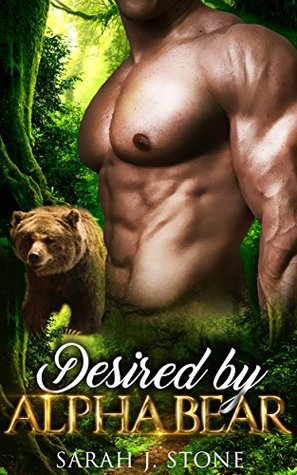 Sometimes a story comes along that reminds me all over again of just why I absolutely love Paranormal Romance.  To be transported into a world where such magical beings exist, to take part in their adventures and to face the most vile villains known to any species.  Desired by Alpha Bear is a perfect example of why I love Paranormal Romance and the sub-genre of Shifter Romance so very much.

Kevin is a powerful member of Shadow Claw, a trusted friend of the Alpha, Luke, and a vigilant defender of his pack.  He is experiencing sudden weakness that he cannot cover up and his friends are becoming concerned.  On this fateful day Kevin will experience such pain and confusion as well as the undeniable need to head out into the woods surrounding their den in search of… he doesn’t know, but he knows he needs to move.  What awaits him is a young woman, human but with something more about her.  The human is grievously wounded he will instinctively open up himself to heal her, protect her and return her to the safety of his pack’s den.  What he doesn’t realize is that he is rescuing his mate, and a woman of such unknown powers she, they, will change the course of history.

Nina is a powerful young witch.  A woman of prophetic dreams, a quiet unassuming woman who has outwitted one of the strongest witches around.  Now on the run in search of the Council, now disbanded, but she knows that only they can help her prevent what her dreams are showing her.  With only her familiar, Totters, at her side, Nina will face the wrath of pure evil and discover a group of people well worth fighting for and with.  And her mate, even if she is unsure of herself, she’s learning to trust and believe in possibilities… but it will come at a cost, one she’s got to be willing to pay.

Desired by Alpha Bear is a wonderful mix of several paranormal species, witches, age old prophecies, love and saving the good of their world.  Fast paced with definite sexy moments this is a story to satisfy just about every button that needs pushed for a great paranormal or shifter romance story.  I adored Nina, who often times is confused with a world she truly knows little about.  Her bravery and stubbornness simply captured my attention from the start.  Kevin is a strong shifter mate, although he does make mistakes, ones he’ll pay for, but at his core is his deep love and need for Nina.  He truly would follow her to the ends of the earth.  I loved Totters, Nina’s familiar, who plays a large part in this suspenseful shifter romance.  And running into familiar faces from the first story simply jelled this story together in a believable way.  I would recommend this story and this series – and now I have an idea of how many books may still be on the horizon.  Not saying but you do the math by the ending.  *grin*  Loved it and I’m heading to Amazon now to download the next story in this series…. I can already tell it’s gonna be a long night because I won’t want to stop.

I red this title through my Kindle Unlimited subscription.