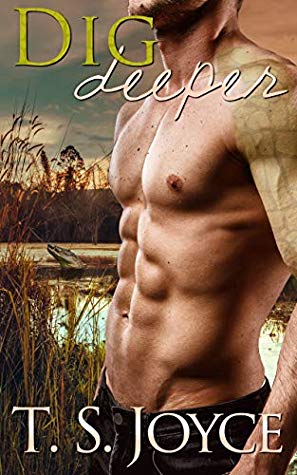 DIG DEEPER brings us Holt’s cousin, Liam’s story and perhaps a softening of the anger of their relationship.  This one is full of moments that made me chuckle but I think my favorite laugh out loud moments came very early on with a conversation between Holt and Liam.  Sometimes men, including shifters, are simply clueless about their women.  *grin*

I liked Morgan.  She’s in a rough place in life, a poacher’s daughter who has been talked down to, used as a maid, and is basically being handed off to one of her father’s friends or fellow poachers as his “woman”.  Morgan wants none of that and has been slowly hiding away money, enough to finally leave this place, her father’s illegal actions and live her own life.  She’s also been holding on tightly to a secret about a local shifter, Liam.  She’s seen him change into his gator late one night in the swamps.  She’s never mentioned it to anyone, especially not her father who would love nothing more than to take that gator’s hide… even if there was a man within the animal as well.  Life’s about to change for Morgan, it’s not what she’s expecting but it certainly is exactly what she needs – true freedom from her past.

I loved watching Morgan change before our eyes as she’s finding the happiness, the strength to stand up to her father and to stand at Liam’s side.  There are definitely sizzling moments in DIG DEEP and there is also a tender love being experienced between two people who should be, at the least, very leary of each other.  There is danger, betrayal, and outside interference going on in Uncertain – there is also loyalty, love, and the magic of the swamps at work as well.

I’m enjoying the Keepers of the Swamp series, even though I’ve not found gators at all attractive in the past.  Yet, these stories seem shorter, not the background information I’m accustomed to.  Doesn’t change my enjoyment, simply an observation.  And, perhaps, I just have become so used to the layers of Damon’s Mountains universe that I’m missing something that isn’t really there (yet) to miss.  I don’t know, just a feeling that won’t go away.

In any event, if you love the magic of the bayou, the mystery of the swamps, discovering a Shifter that you aren’t that comfortable with… and a damned good story then you’ll want to get caught up with the Keepers of the Swamp series.  And, oh, am I ever looking forward to Fargo’s story up next!