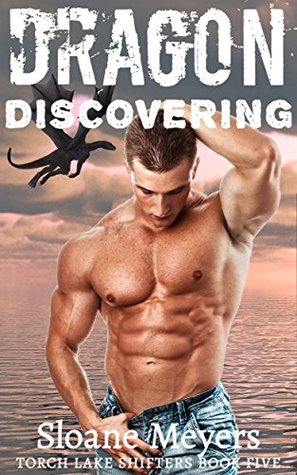 One annoying morning in the spotlight of television cameras will change two particular lives forever.  Seth has no desire to be sitting in a make up chair having girly gunk slapped on his face for this interview, but the lovely lady teasing him into doing it – well, she’s worth a second look.  Soon Seth and Claire will be in the middle of an explosion, Dark Wizards, a rescue mission and perhaps, if they survive, the love of a lifetime.

Dragon Discovering is fast paced, definitely steamy and brings a different type of battle to Torch Lake.  This story is a perfect example of why I’m constantly suggesting to read series from the beginning, in order.  There is something found in the previous story, Dragon Protecting, that caught my imagination’s eye as something important for the future.  And it is that exact item that is at the base of this story.  Events clicked into place for me much earlier because of that prior knowledge.  Absolutely necessary to enjoy the current story?  Not at all, but it brings everything together better in a group of “Aha” moments – and if you’re a mystery buff as well, those little clues along the way matter.

Seth and Claire make a fun couple.  Her wizard talents as well as her make up artist skills definitely were needed in this story.  It’s not only dragons who can save the day.  *grin*  I had fun with this story and would recommend it to any Paranormal Romance or Shifter Romance reader.