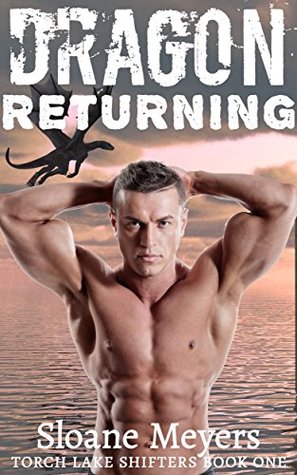 Dragon shifter Russ Porter lost nearly everything when he was dragged into the last Dark War against his will. Now, he’s determined to stay as far away from magic and shifters as he can. He’s perfectly content living as a human in a city full of humans, until Mandy Evans walks in and turns his world upside down. She’s smoking hot, but she’s also a wizard, and Russ angrily pushes her away…until she makes him an offer he can’t refuse: piles of cash to complete one little job that requires a dragon’s touch. The Dark War left Russ penniless, so he reluctantly agrees to accompany Mandy back to the wizard-shifter town of Torch Lake on a temporary basis—very temporary. He’s planning to hightail it back to his human existence as soon as possible, but he never counted on falling for beautiful Mandy. And he definitely never counted on Mandy needing his help to escape the dark wizards who still lurk in the shadows…

Wizard Mandy Evans has a lot to prove. She’s the first female wizard to be given a shot at recruiting a dragon shifter to help clean up the aftershocks of evil that threaten her new hometown of Torch Lake. She nearly botches the job, but manages to convince Russ Porter to help out at the last moment. Breathing a sigh of relief, she thinks she’s finally made a real difference for the cause of good. But soon she realizes that evil is lurking closer to home than she ever imagined, and she needs Russ’s help to hold it back. The only problem is that Russ is determined to get away from her, and away from Torch Lake, as soon as possible. In a wild bid to get him to stay, she realizes that her reasons for wanting him nearby go deeper than just fighting evil: her heart has become tangled up with his.

Will love be enough to convince Russ to leave his old life behind and join Mandy in building a new one together?

Titles in the Torch Lake Shifters series include:  Dragon Returning –

The Torch Lake Shifters series takes place a few short years after the Dark Magic Wars and Saul’s defeat.  Since that time several shifter and wizard towns have been created across the country.  No one wants to go back to the times when dark magic and evil people tried to take control of everything… well, no sane person wants to go back to that.  Torch Lake is just one of these new towns, completely integrated with both shifters of all kinds and wizards determined to keep the peace intact.  Their High Council, and other various governmental offices work to recruit dragons who have returned to their human world after the war.  It’s become a dangerous situation where some of the monsters created by Saul’s spells have self-populated in the surrounding forests.  These monsters can only be killed by dragon fire.   So it is in everyone’s best interests to have more than a few dragons working and living in the Torch Lake community.

Mandy works as a Dragon Recovery Specialist… well, she would if her commander ever let the females of the team do anything besides paperwork.  In this meeting she’s been given an assignment, begrudgingly and with obvious sneering involved but still it’s a chance to prove herself.  But, the way the assignment is worded makes no sense.  While Mandy hesitates about how she is to bring her subject back to Torch Lake, she sin’t going to do anything to lose this chance.  Even if it makes absolutely no sense, and goes against what the High Council has publicly stated.

Russ was one of the dragons captured and tortured during Saul’s insane war.  On his return home to Chicago he’s found that his life is totally messed up.  The promotion he was in line for disappeared, just like he did for three months of captivity, the bills are mounting up and life is not as good as it should be.  He didn’t expect the instant attraction he felt for a stranger at his local bar hangout.   Sure, he was interested but he had no intention of settling down with anyone.  He’d made up his mind to remain hidden in the human world… and that meant alone.  Mandy tried her best to follow the High Council’s orders but she couldn’t do it.  She told Russ the truth about why she met him and what Torch Lake could offer him.  In the end it was his choice to help the shifter-wizard town, even if it meant he’d be rich beyond his dreams.

Dragon Returning once again captured my interest in the post-Dark War time that we experienced in the earlier connecting set of series.  I was glad to see the community continuing, not simply stopping at the end of the war.  Where powerful people gather there is always the risk of corruption and that evil that only the power hungry understand.  While Torch Lake believes the dangers lies outside of their borders, in reality the true danger is much closer as Mandy and Russ will discover.

If you enjoyed Redwood Dragons then I’m certain you would enjoy this new series that combines shifters and wizards creating a new life for themselves.  Mandy and Russ were a compelling couple.  They definitely have issues but they also have an attraction that can overcome… if they listen to their hearts.  While there is a little bit of world building in this newly created town, it’s not overwhelming and flows naturally.  I’d definitely recommend Dragon Returning, and now I’m just waiting for the next story to be released.