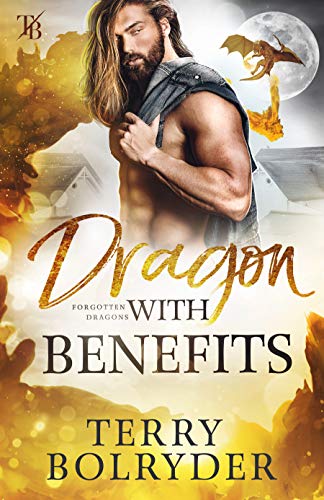 Dragon with Benefits, the fourth title in this series brings us Trevor and Chad, the double dragons – and, at times, the bane of the other dragons we’ve met so far in the Forgotten Dragons series are about to have their perceived world/future set on its edge for this double dragon team will not be forming a triad as it is believed all double dragons must.  No, this time fate has a far different future in store for these, at times uppity, always snarky, and definitely sexy dragon friends.  Trevor makes himself an internet sensation all over his annoyance at a sushi delivery as he punts his bagged meal and is captured on someone’s ever-present phone camera… now he’s got reporters, strangers, and one very unique woman constantly at his door wanting more about this temper-tantrum throwing, although still hidden from humans, dragon.

Petra is what he thought he’d never find – his mate, and only his mate, not part of a triad to be shared with Chad.  Now Trevor has to rethink everything he’s ever known, salvage hurting his mate with his actions and holding on to the friendship that has kept him steady all these long years.  Add to all of that drama, if that isn’t enough, is a new twist in this series — and one I’m not about to spoil for you, but the possibilities for now and the future are endless.

I enjoyed Dragon with Benefits so much.  Yeah, at times I did think Trevor got exactly what he deserved but I also felt sorry for him at times since he really is completely torn over knowing that Petra is his mate and not knowing how to tell her, tell Chad or the Oracle – let alone a bunch of dragons who would just love to have something to hold over his head (they wouldn’t really but tease a lot, most definitely).  The turn in this series, the one I won’t talk much about, is truly intriguing and I see so many possibilities coming from this – so watch for something even more than the usual unexpected to appear in this dragon’s story.  I had a blast, looking forward to the next story … and what comes beyond.