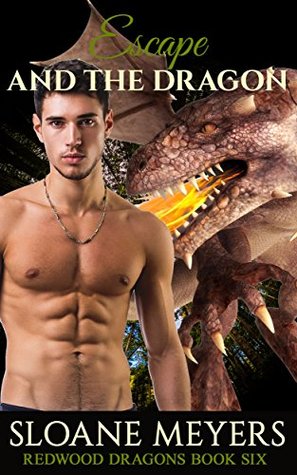 Dragon shifter Owen Pars thought he was in for a boring night of guard duty, when a surprise attack turns his ordinary night into a fight to keep the legendary dragon amethyst safe. He’s received orders to flee from the battle and protect the amethyst at all costs. Luckily for him, his favorite wizard soldier—the beautiful Raven Morey—flees with him. After escaping, they find themselves alone in the world, isolated with no money and no way to contact their clan mates. Owen knows the road home will be dangerous, but his spirits are brightened by the fact that Raven is with him. He’s loved her for a long time, and perhaps this adventure together is the perfect time to confess his feelings for her…if only mortal danger wasn’t following them at every turn.

Wizard Soldier Raven Morey is about as stubborn as they come. So it’s somewhat surprising that she’s fallen so hard for the equally stubborn Owen Pars. Sparks fly whenever they’re together, and not always the good kind. But he understands her better than anyone, and he makes her laugh. Not to mention the fact that he’s undeniably handsome. What more could a girl ask for? So when she finds herself running with him for their lives, while trying desperately to save the dragon amethyst, she takes comfort in the fact that they’re together. And when fires of passion start burning brighter between them despite their desperate situation, she decides that they were meant for each other. But before they can ride off into the sunset, they’ll have to escape from the dark wizards who are trailing their every move.

Will Owen and Raven outwit the dark wizards and find a way to make their love work despite their headstrong personalities?

Most of what you need to know about Escape and the Dragon is in the cover blurb.  What that doesn’t tell you is how intense this fast paced story truly is.  While the amethyst Dragon Stone has been found, now comes the challenge of getting it safely to where the other recovered Dragon Stones are… in Texas or at least that’s where it has to be delivered.  While everyone at the camp in the Redwoods planned their next steps Owen and Raven stood watch over the amethyst stone.  When a complete surprise attack is launched at the camp it’s suddenly up to them to get the dragon stone far away from danger and safely in the hands of the protectors in Texas.  It’s not going to be easy, but Owen and Raven are two very determined souls.

Dragon shifter Owen, and wizard Raven have fought together before.  They’ve flirted and enjoyed a solid friendship – even though each felt there could be more to their relationship they hesitated for their own reasons.  Now in a fight for not only the Dragon Stone’s safety but for their very own lives on this mission, those feelings have come to the surface and have to be dealt with.  In a desperate rush to find safety and to get newly discovered information about Saul and his armies, Raven and Owen give in to this magic that swirls around them.  Life-mates.  Even though neither wanted to acknowledge that in the midst of war.

Their story is full of the bantering we’ve come to expect from this couple, a huge reveal of Saul himself and what he’s been up to in gaining more soldiers for his evil army.  Escape and the Dragon is extremely fast paced, emotional on some levels and determined on others.  This is a couple who know each other, feel for each other but now have to decide if they can actually be with each other right now.  Sexy times, harsh fights, deadly knowledge – this one is packed with adventure for our dragon shifters and the wizards who fight at their sides.

I would recommend this series to any reader of Paranormal Romance or Shifter Romance who enjoys action packed stories, mysteries to unravel and a couple who comes together very naturally.