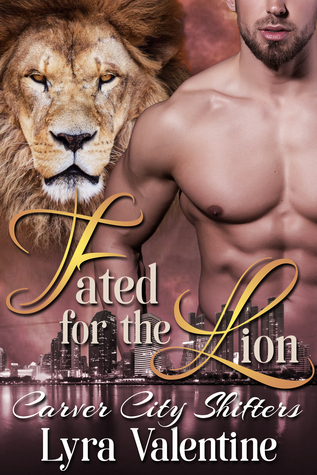 Newly fired, Lena Jeffries ducks into the lobby of a nearby development firm to avoid a brewing thunderstorm. Worried about her next paycheck, the last person she expects to see is Ethan Sanford. Grown up and successful, he filled out his suit to perfection. What happened to the skinny and aloof Ethan from high school?

When Ethan Sanford catches a whiff of the curvaceous Lena, he stops in his tracks. Forbidden from touching her all those years ago, he and his big bad lion aren’t going to let her escape again. Unable to deny the burning attraction any longer, he invites her upstairs with more than a drink on his mind. Overcome by his desire and with a flash of canines, Ethan takes Lena as his mate.

Lena never thought she’d be the type of woman to sleep with her soon to be boss, and makes a quick exit in the morning. Pining over Ethan, she heads to a diner with her best friend to talk it over. Soon, her sudden cravings for meat puts her friend in the war path of a first time she-cat shift.

Ethan is not happy to find his mate missing when he wakes. Will Ethan manage to find and calm the new lioness before she puts the entire city on the menu?

Read on for my thoughts on Fated For The Lion.

The day you are propositioned by your boss, retaliate in the best way possible and end up fired usually would not be considered the best day of your life.  Usually.  For Lena it was a simple thunderstorm on the walk away from the office she no longer had a job at.  She’d ducked into a newer constructed building thinking to dodge the rain for a bit – and looked across the lobby at…him.  Ethan Sanford.  The high school crush, the boy who was never cruel to her, like some, but did his best to ignore her.  Why such an aloof boy or man should have won her teenage heart she couldn’t say just that he had and it seems that attraction continues on.

Ethan scented her from across the lobby.  His mate.  Lena.  The girl he’d pined for all through their high school days.  He’d been the rich kid, she the daughter of a teacher, otherwise she’d have never been in the same school with Ethan.  Back then it would have been impossible to claim her.  For one she was human, and would have to agree to be turned.  But the stronger reason was his father, the Alpha of his pride – he never would have allowed a human into the pride.  And then Ethan wasn’t strong enough to challenge his father for the Alpha role.  Much has changed in the years since he last saw Lena.  She was stunningly beautiful, curves galore and a bit of an attitude.  Even better than he remembered.  He’d have to work fast to ensure that he didn’t lose her once again – but nothing would separate them again, not if he had his way about it.  And he had no doubt that he’d get his way.

To say that together Ethan and Lena are sizzlin,’ smokin’ hot would be like saying a small group gathers in New York City to watch a crystal ball drop every New Year’s Eve.  Yeah.  There is no lack of sexy times in Fated For The Lion.  Ethan moves very quickly to claim his mate – perhaps too quickly as he didn’t exactly ask permission, and she’d left his apartment before he could own up to that bite on her neck last night.  Now Lena’s about to shift for the first time and only the fast thinking of another shifter and her friend, who seems to know more about the situation than she “should” saves the other customers calmly eating their breakfasts from being Lena’s first shifted meal.

And so begins Lena and Ethan’s romantic adventure.  Before too much time has passed Ethan will have some explaining to do, Lena will meet the rest of her new pride – and one little vicious she-cat will try to make trouble, with disastrous results.. for herself.

If you love Shifter Romance, lots and lots of sexy times between mates, a solid story and a few mysteries that will continue through the series – then have I got a story for you.  Check out Fated For The Lion and get in on the fun from the very beginning.