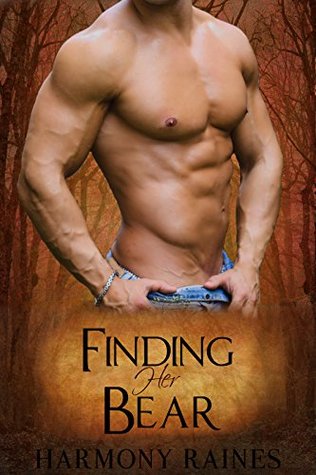 Kayleigh has never know what it’s like to stay in one place for long. She’s never experienced being part of a real family, and has no intention of ever settling down and having kids. In fact, until she arrived in Bear Creek, she had never wanted to stick around for more than a couple of months.

It was just her luck that her job was coming to an end and she would have to move on whether she wanted to or not. Unless someone gave her a reason to stay…

But when your mate has sworn to never settle down and have kids. What’s a bear to do?

This bear has to persuade Kayleigh that she is his eternal mate. He will always be there for her, and he most definitely wants to have lots of bear cubs running around.

The only problem … he ends up looking like a weird stalker. Can he change her mind and convince her to marry him and start a family?

Finding Her Bear is a quick, sexy story that is entertaining and introduces us to more of the bear shifters of Bear Creek.  Kayleigh has been working in the local diner over the summer rush season, now her job is about to be gone and she has to find another one fast or leave town.  Since she’s been a woman who rarely puts down roots, she’s a bit surprised at how much she really wants to stay in Bear Creek, a place that could easily feel like home.  But with no way to support herself, it looks like it’s time to hit the road one again.

Daryl has been coming into the diner for breakfast everyday with his brother Sam  Oh, it’s not that they couldn’t easily eat at home, but Kayleigh is Daryl’s mate and this is his daily dose of being around her.  Daryl is extremely shy and rarely speaks to her beyond his breakfast order.  Yet his hesitation to even ask her out is about to cost him his mate if he doesn’t do something right now.  He’ll get his chance under slightly unusual circumstances then it’s up to him to convince Kayleigh to take a chance on staying… with him.

Take one woman who has been shuffled through the foster care system since childhood and doesn’t trust that anything lasts, not even love and one very shy bear shifter who is desperate to keep his mate near – and you have the chance for happiness or a major mess up.

I enjoyed Kayleigh and Daryl’s romance.  It’s short, sexy with a touch of sweet and a bit of danger.  If you plan on starting Harmony Raines’ new series Return to Bear Creek then this first series of short stories is a fun, quick way to get caught up on the history of some of the secondary characters you’ll meet in that new series.  I would definitely recommend this series to any Paranormal Romance or Shifter Romance reader.