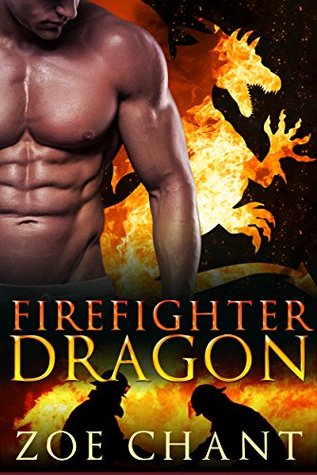 When curvy American archaeologist Virginia Jones finds the lost burial mound of an ancient Anglo-Saxon king near the English city of Brighton, she uncovers much more than she expected. Unearthing a priceless artifact summons an evil dragon who’ll stop at nothing to claim the treasure for his own hoard. Trapped in a burning building by a beast that ought to be imaginary, Virginia’s only hope is to call for emergency…

Dai Drake has an unusual occupation for a dragon shifter — he’s a firefighter, part of an elite all-shifter crew. When he rescues Virginia from the blaze, he instantly recognizes her as his one true mate. But how can he tell her what she is, when the first dragon she ever met was a greedy, bloodthirsty monster?

As Virginia and Dai work together to save the artifact from falling into the wrong claws, the spark between them quickly grows to an inferno. But will his secret make their relationship go up in smoke?

Read on for my thoughts on Firefighter Dragon.

I am amazed by the imagination of Zoe Chant.  From seriously hot to quirky and cute, I have not met a Zoe Chant story that I did not love.  Period.  Yet with Firefighter Dragon and Dai’s crew of fellow shifters I am forced to publicly beg – truly plead for them all to have their own stories for each member of this Fire & Rescue crew sounds fascinating and hot – I need their stories as well.  *gathers up my dignity to continue this review – grin*

Virginia Jones (another US of A state named archaeologist – no relation) has found the archaeological find of her career.  Unfortunately, it’s on a construction site that she’s, well, broken into – plus the fact that her major rival for all treasure hunting finds has shown up to take what he considers his.  She’d always known that Bertram was a pompous idiot – what she could never have imagined was that he also was a white dragon shifter who was willing to kill for the artifact in her possession.  Trapped in a burning building by this evil, Virginia makes a desperate call for help – and gets far more than she ever bargained for.

It took only seconds for Daifydd Drake to realize that this fire was set – with dragonfire.  While he passed that thought along to the other members of his rescue crew onsite, he frantically searched for the human who was trapped in this inferno.  As Dai carries Virginia out of the blaze and entrusts her to the healer among his crew, Dai is faced with yet another dilemma.  Virginia is his mate – and her first experience around dragons almost got her killed.

Firefighter Dragon is a fun, sexy, intense story that gives us a taste of dragon lore and some extremely interesting shifters in this Fire & Rescue crew.  With a villain who is so easy to hate, Dai and Virginia will face some intense adventures to not only keep the artifact safe, but to work out their relationship as well.  You see, Dai hasn’t been entirely truthful with his mate.  Oh, he’s acknowledged that he has dragon blood, just not that he’s a full fledged dragon.  Her most recent introduction to dragons has not set a good example of his kind for his mate.  Silly dragon will put off saying what he must to the woman who is his world.  He cannot risk her rejection, but he also cannot risk her life.

I was completely captivated by this story, and hope that it is only the beginning of getting to know the rest of Dai’s crew.  They all have such delicious possibilities that I will be watching closely for their stories to appear.

Do you love Shifter Romance?  Then Firefighter Dragon needs to be on your to read list.  It’s a powerful love story with enchanting dragon lore.  What more could you ask for?