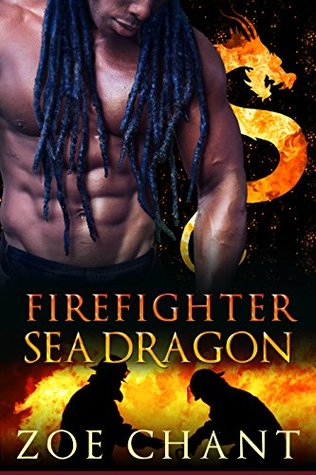 Neridia Small just wants to fit in – but that’s hard when you stand six foot six in your bare feet. Maybe it would be okay if she was supermodel skinny to go with her supermodel height, but a ridiculously tall, fat black woman? She’s only ever attracted the wrong sort of attention. She longs to find a man who’ll look past her size and see the real her. A nice, normal man…

John Doe will never understand humans. A sea dragon knight from the hidden underwater city of Atlantis, he reluctantly took human form in order to search the land for the missing Pearl Emperor, ruler of all sea shifters. Though John has found unexpected friendship as part of a unique all-shifter firefighting team, his heart will always lie under the ocean… until he rescues Neridia from a mugging.

As a knight, John’s forbidden from taking any mate – let alone a human. And a sea dragon’s honor is his life. But when a decades-old secret rises to the surface at last, only John can protect Neridia from a deadly foe. Fate binds John and Neridia together, honor demands that they stay apart… and love will require one of them to sacrifice everything.

Firefighter Sea Dragon is an intricately woven tale of a lost leader, an honorable knight, a land of fable, an evil villain hiding in plain sight – and a love that will be willing to make any sacrifice necessary for a mate’s happiness or life.  Every story in the Fire & Rescue Shifters series has been an amazing read, but John and Neridia’s romance is simply riveting.  John has always been a man of honor, perhaps a deeper code of honor than his friends ever imagined, after all they were land walkers and he was of the sea.  So when John finally discovers his mate, his friends do not, cannot understand how his honor binds him to a certain protocol.  A Knight is nothing without his honor, and breaking his vows would mean setting aside his honor – something he is incapable of doing.

Neridia has been sheltered, protected by her family from the rest of the world.  Now after her father’s passing she is truly alone in the world and her attempt at finding companionship has gone horribly wrong.  Neridia stands out among humans, striking, and tall she is often the brunt of giggles and pointing fingers.  When she meets John there is a spark between them, and possibilities that she is truly afraid of pursuing.

The plot of Firefighter Sea Dragon is so finely woven it was a complete pleasure to read.  I’ve enjoyed all of the stories in this series, but this one has a special feel to it that draws you in a bit deeper than you imagined possible.  I’d love to talk about it, but to do so would give away spoilers so I’ll simply say that this is a story that you’ll want to read.  There may be times that you’ll want to shake John for sticking to his honor, or comfort Neridia when she doubts herself but you will be engaged in their story.

I would highly recommend this story and this series to any Paranormal Romance or Shifter Romance reader who enjoys an intricate plot, strong characters and revisiting with old friends who have already had their stories told or will soon.  This is a story well worth your time.