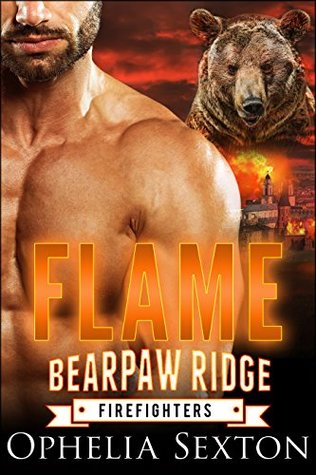 A hotshot in trouble…

Thor Swanson is a bear shifter with a taste for danger. He’s also a firefighter who’s part of an elite smoke-jumper team. When a parachuting accident leaves him badly injured, he knows he can’t go to a hospital. Unfortunately, he can’t remember much else. All he knows is that the beautiful woman nursing him back to health is his. He’ll protect her with his life.

A beautiful shifter in worse trouble…

Cassandra Long is a curvy sabertooth shifter on the run. Her dreams of going to graduate school crashed and burned when her father arranged to marry her off to the head of a powerful and corrupt sabertooth clan in Texas. Edward Baldwin is a beast of a man…and he wasted no time in staking his claim. Since escaping her ex-fiance’s clutches, a traumatized Cassie has barely managed to stay one step ahead of the violent, terrifying shifter who thinks he owns her. The day he finds her, there’ll be hell to pay.

But suddenly Thor bursts into Cassie’s life. And just like that, everything changes. Deep inside, Cassie knows she has to stay close to the handsome firefighter, no matter what. It’s finally time to stop running.

When Baldwin catches up to Cassie at last, Thor’s determined to stop the evil shifter in his tracks. Nobody takes his fated mate. But Thor’s still hurt. Can he find the strength to save her, when he can hardly remember his own last name?  And can Cassie step up and save Thor right back?

Flame is a gripping story from beginning to the end.  It’s impossible to not feel Cassie’s terror or feel her determination to remain free and to not put those she cares about in danger.  She’s a brave woman who doesn’t see herself that way at all.  When Thor actually lands in front of her, her destiny has already been sealed.

After the accident Thor may not remember much, but he knows that this woman is worth protecting, even if he is in no real condition to do that.  He’ll do everything he can to keep her safe and out of danger.  Even if that means going against his family.

The pace, the action and even the tension is built up in Flame.  Not only are Thor and Cassie fighting against a powerful, sneaky enemy they also have to face down Thor’s family and their prejudice against Cassie’s shifter lineage.  Now admittedly, they do have their background reasons for it was a group of sabertooth cats that tried to harm members of their family not so long ago.  Thor’s defense of his mate, his willingness to walk away from his entire family for her is an amazing scene..  Mamma bears should know better than to try to get between mates.  The villain in this story is so easy to loathe, he is the lowest of the low – and it was pretty amazing to see Cassie deal with him.  Completely satisfying.

If you’re in the mood for some fast paced action, danger, tensions, a bit of family drama and a couple to get behind from their first meeting – then Flame is a story you’ll want to pick up.  I do feel that this is a series that should be read in order as events in past stories are discussed in the current one – it simply makes more reading “sense” to follow this one from the start… in my opinion.  I would not hesitate to recommend this story or this series to any Paranormal Romance or Shifter Romance reader.  A solid story, likable characters, a villain to hate, secondary characters to enjoy, it’s got everything a really good story needs.